"I'm very passionate about making sure young people have the opportunity to be exposed to good food." 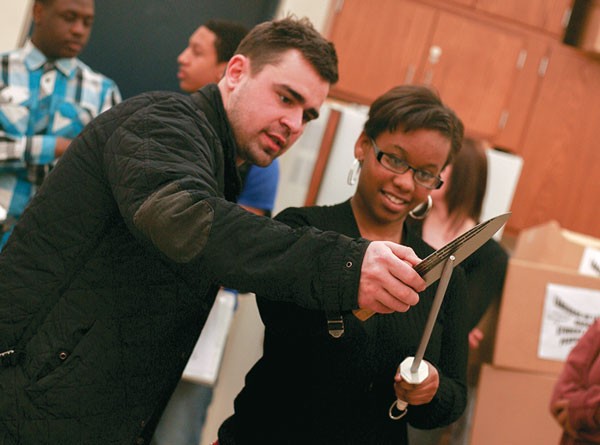 Bobby Fry teaches a student how to sharpen her knife.

When the new after-school cooking club launched at Barack Obama Academy in East Liberty, 15-year-old Joel Macklin was one of the first to sign up.

"I don't know how to cook," he says, adding that as a sophomore, he's been thinking about what it will be like being on his own in college. "I was really interested in learning how to do basic cooking, like make an egg."

He's learned that and more.

"It's been a blast. Last week, we learned how to make pancakes. I'm ecstatic about that. We did crab cakes, too. It's not that hard."

The club, led by one of the partners in the Strip District's Bar Marco restaurant, Bobby Fry, and the "head lunch lady" at the Environmental Charter School, Kelsey Weisgerber, features rotating guest chefs from Pittsburgh restaurants, many of whom also helped host a dinner raising $9,000 to buy the students their own knives, cutting boards and cookbooks. It also paid for the tables, silverware and glassware needed in the classroom.

"It's been an awesome experience for the students," says Obama principal Wayne Walters.

Fry says he and Weisgerber hatched the idea to sponsor a cooking club after talking with Jamie Oliver, the host of the TV show Food Revolution, during last year's One Young World Summit.

"I'm very passionate about making sure young people have the opportunity to be exposed to good food," Fry says.

Fry is also working with students at Brashear High School to establish a salad bar — a project he took on after visiting the class and seeing how defeated they were at not being able to make changes to the lunches they are served.

"Let's get a salad bar one day a week. If nothing else," he says. "These kids just need a base hit."

Pittsburgh School Board director Bill Isler, who attended, says a lot depends on the district's budget, but he thinks Fry's effort is "fabulous."

"Just having the involvement of the restaurants and the chefs [in the district], really makes us want to step up," Isler says.