The re-release of Godard's 1963 arthouse classic

It's easy to see, almost half a century later, why the international cinema world went fou over Jean-Luc Godard's 1963 drama-cum-treatise, Contempt.

It opens with the credits spoken by a narrator as a movie camera glides down a track, photographing a small company of actors performing a scene. Just before the actual story begins, the somber male narrator quotes André Bazin, the great film theorist and Godard's mentor: "The cinema substitutes for our gaze a world more in harmony with our desires." Then he tells us: "Contempt is a story of that world."

Cut to Brigitte Bardot's bare ass, her body -- or Camille's body, technically, because that's Bardot's "character" -- prone in bed alongside her husband, Paul (Michel Piccoli). He's a novelist and playwright whom Jerry (Jack Palance), a boorish American film producer, wants to hire to punch up his script for a version of the Odyssey that he's making -- and that the director, Fritz Lang (playing "himself"), is ruining with arty seriousness. ("Every time I hear the word 'culture,'" Jerry says, after whacking some food across a room, "I bring out my checkbook.")

In a screening room, watching some of Lang's footage of ancient Greece, Jerry declares gravely: "I like gods. I like them very much. I know exactly how they feel." Lang replies: "Don't forget. The gods have not created Man. Man created gods." Then, a "mermaid" appears on the screen: She's naked, and very stacked. Jerry breaks into a boyish giggle. He tells Lang: "Fritz, that's wonderful for you and me. But do you think the public's going to understand?"

Yes and no. He's talking about Godard's Contempt as much as (more than?) Lang's Odysseus. But he might as well be talking about anything. We embraced Godard's cinema to hear people talk, and to see them work through their creator's anxieties about love, art and, eventually, culture and politics. Godard explores the former pair of topics thoroughly in Contempt, and most of the creative conflicts among his characters revolve around Paul's brooding purity. He wants to live in a world of art and ideas, but "when it comes to the movies, dreams aren't enough." All Lang can say to that is: "We must suffer."

We've heard this kind of talk from so many films in the intervening years that hearing it again in Contempt is now more quaint than provocative. Ditto for Bardot's ass: In fact, I like the idea of it being "quaint," and I certainly wouldn't want to see what it looks like today. She's a bon-bon in the movie, more like set decoration than an actual character. She's form and function without substance, a prop to be disposed of when Godard's done with her, and dispose of her he does. He certainly doesn't care whether we understand why she's come to hate Paul, his alter ego.

These characters can't survive together because their egos and vanities are all too big, even for Cinemascope, about which Lang says, "It wasn't made for people. It's only good for snakes and funerals." In the scene introducing Camille, Bardot's body fills the widescreen, and Godard moves his camera slowly, leeringly up and down its length as she quizzes Paul about what part of it he likes best. If he knows what's good for him (and he doesn't), he won't choose one over the other.

Contempt is still (or finally?) fun to watch, at once studiously intellectual and completely transparent. You don't have to work too hard to get a lot of what Godard is saying, although a knowledge of the classics allows you to know whom the characters are quoting a few seconds before they tell you. And for film buffs, it's amusing to see the leonine Lang -- in pince-nez glasses, his thinning hair combed back -- coolly taking Jerry's pedestrian abuse. His best work (Metropolis, M, Scarlet Street) well behind him, he's simply enjoying his European vacation in Artfilmland.

Godard loved Hollywood iconography (as per Breathless), but he hated Hollywood. He spent much of his career enslaved to that duality. The same is true of his views on love, so the "contempt" of his title refers as much to commercial cinema as it does to sexual relations. (His love-hate with politics came later.) Billy Wilder's Sunset Boulevard (1950) is a better film about Hollywood; Truffaut's Day for Night (1973) is a better film about filmmaking. And O Brother, Where Art Thou? is a better riff on the Odyssey. But Contempt is as good a film about Godard as you're likely to find. In French, German and English, with subtitles. 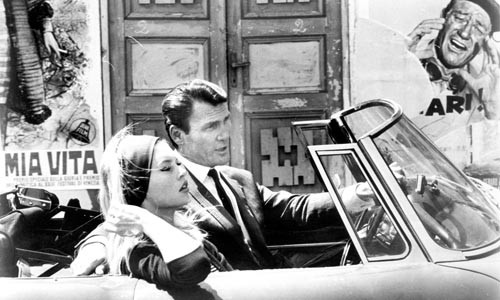