Contemporary composer Anthony Braxton visits for a weekend of performances

It's not hyperbole to call Anthony Braxton's weekend residence in Pittsburgh a major musical event. The multi-reed playing composer rose from the 1960s Chicago scene that birthed the Association for the Advancement of Creative Musicians (AACM), and he has become one of the country's most prolific and adventurous composers, his legacy rivaling those of free-jazz pioneers Ornette Coleman and Cecil Taylor. Like those two, Braxton has received the MacArthur Foundation's Fellows Program, the so-called "Genius Grant," a $500,000 award bestowed on Americans who "show exceptional promise and promise for continued and enhanced creative work."

While Braxton appears this Fri., May 30, with his septet at the Manchester Craftsmen's Guild, that's just the start. On Saturday and Sunday mornings, he joins the local Syrinx Ensemble at the National Aviary where they'll play among (and presumably together with) the birds. Saturday evening, the Three Rivers Tri-Centric Ensemble -- an 11-piece group of students from the High School for the Creative and Performing Arts (CAPA) -- performs a set of Braxton pieces with the composer.

This type of musical opportunity doesn't happen often -- Braxton's only other local appearance was 1998's Mellon Jazz Festival -- but it came together through the coaxing of Ben Opie. The local saxophonist's numerous musical projects include the Syrinx Ensemble, and directing the Tri-Centric Ensemble at CAPA. Syrinx member Michael Pestel, a former Chatham College professor, met Braxton at Wesleyan University, where both teach, and mentioned Opie's work with high school students, whom he's introduced to Braxton's music. "I was totally shocked and surprised and extremely grateful," Braxton says. "I'm looking forward to the experience of playing music with them."

The Ensemble has been working from Braxton's series of works called "Ghost Trance Music," which has origins in sacred, ritualistic music marked by repeating phrases. To listen to it, or to read some of his theoretical explanations, the music can come off as complex and challenging. (Over 40 years, Braxton has identified his pieces with illustrated diagrams using shapes rather than titles, though each also has a number.) But in conversation, it's easy to see the logic, and how open-minded high school students could tackle them.

"The range of difficulty starts at the very easy and fundamental and goes to very complex," says Braxton. "I've tried as a composer to write across the board, from solo music to chamber music to orchestral music. And I've tried to have the experience of fundamental, architectural models that are not complex, all the way to combination structures that involve different kinds of strategies and model building."

Braxton's discography includes more than 100 albums, and he plays almost every type of saxophone, from sopranino to the gigantic contrabass sax. His compositions include everything from solo saxophone to orchestral works, and he has released several albums devoted to people like Charlie Parker and Thelonious Monk, which prove he can tear through the hardest bebop changes with ease. However, he doesn't identify himself as a jazz musician. "I see myself as a creative musician who was born in a time where it would be possible to fuse world musics and learn from the great picture of Earth musics, and to look for strategies and states of music that respond to the challenge of the Third Millennium," he says.

Braxton's heroes include Karlheinz Stockhausen and Arnold Schoenberg along with Sun Ra and Ornette Coleman -- "people who came up to the plate and fought for the right to do their music," he says. "That's the tradition I'm from." That tradition means that most of his recognition came from Europe and Asia before opportunities began springing up at home. Only in recent years has Braxton received more performance offers in the United States, but he isn't bitter. "The struggle that I'm involved with is the struggle that is a luxury in the sense that I was able to discover something that I wanted to do for the rest of my life," he says. "So I don't feel like anybody owes me anything."

Braxton and Opie plan to record together this weekend as well, an act that expresses the veteran's enthusiasm for the trip to Pittsburgh. "All over our country, there's a beautiful family of men and women, in most cases people in the underground, but there's a family that loves music," he says. "And in meeting Ben Opie I feel that I have met another member of my family. My hope is that we will find ways to come together and work on many projects as we go forward in life." 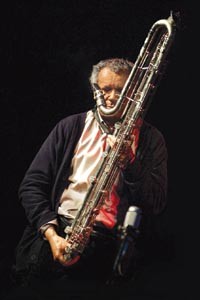