Contemporary Choreographers program is a triumph 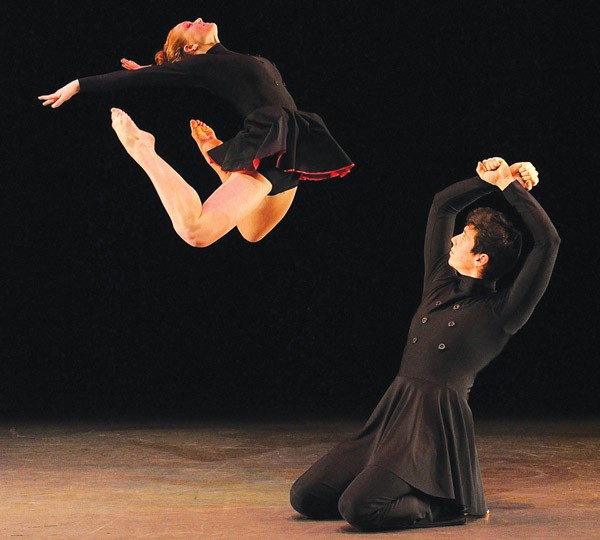 Photo courtesy of Drew Yenchak.
Kenny Corrigan and Kali Grinder of the Conservatory Dance Company in Christoper Huggins' "Enemy Behind the Gates."

Set to a dramatic score by Michael Gordon, the ballet's 10 dancers seemed to embody a mix of opposing character types, some primal, others refined; the dichotomy suggested a predator-prey relationship. Whatever the deeper meaning, the ballet was well crafted and innovative and showed Verona to be a choreographer of great promise. Highlighting the adroitly danced ballet was the captivating performance of Jocelyn Wright in a quiet, graceful solo.

Next, Oscar Carrillo and Nina Newkirk performed Patrick Franz's 1980 pas de deux "Celcius." The genteel ballet had a traditional Japanese feel to it, structured and formal. It showed two lovers methodically coming to terms with the nature of their relationship.

"Delectably bifurcated" describes Jessica Lang's "La Belle Danse." One moment, its dancers engaged in pretty, joyous movement, a la a Gerald Arpino ballet; the next, they seemed to be channeling Paul Taylor's "Esplanade," with women jumping into their male partners' arms in seated positions. Both aspects worked tastefully together.

The program closed with Christopher Huggins' "Enemy Behind the Gates," a work that has become synonymous with Philadelphia super-troupe Philadanco. The relentless, show-stopping piece depicts a militaristic society panicked on the verge of a doomsday scenario. CDC's performance of it was energetic and deft.

For what is ostensibly a professional dance company in the guise of a student troupe, CDC's Contemporary Choreographers was a triumph of fabulous dancing and great dance works.