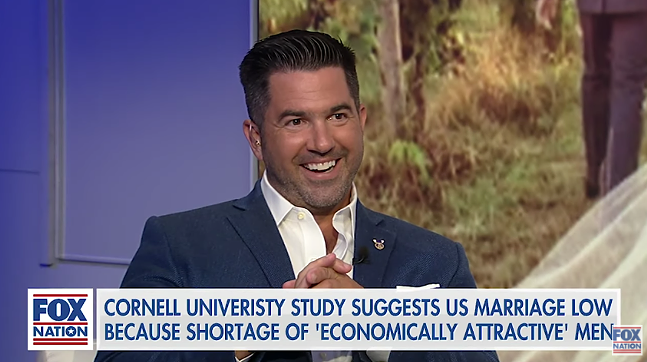 Screenshot taken from YouTube
Sean Parnell
In the 1980s, the idea that American women could and should earn as much as men, as well as be the head of their respective households, was hitting the mainstream. It was long overdue, of course, and many women were open about being ambitious in their careers.

Nearly 40 years later, women’s rights still have a ways to go, but they have progressed even further in American culture. Being shamed for wanting to be a single mom or wanting to be financially successful by oneself is becoming a relic of the past.

In a Sept. 17, 2019 appearance on Fox Nation, about one month before he announced his run to challenge U.S. Rep. Conor Lamb (D-Mt. Lebanon), Parnell says that modern-day feminism has driven a wedge between men and women.

“From an evolutionary standpoint, it used to be women were attracted to your strength because you could defend them from dinosaurs,” said Parnell. (Dinosaurs went extinct more than 65 million years before humans evolved.)

“But now your financial status in today’s society is emblematic of your strength, which is why you have all these young hotties marrying these old guys," he continued. "I am gonna say something very un-PC, I reject this study wholesale. I feel like the whole happy wife, happy life nonsense has done nothing but raise one generation of women tyrants after the next.”

Throughout his campaign, Parnell's chief tactic has been to accuse Lamb of being a phony moderate, and saying that he is actually liberal. In March, Parnell inflated the number of fracking jobs in the Pittsburgh area in an attempt to criticize Lamb.

However, Parnell has yet to show how any of his stances differ from those of any other arch-conservative. While Lamb has taken stances that rankle progressives, like a recent vote against a bill supporting legalizing recreational marijuana, Parnell hasn’t campaigned on any stances that might be supported by liberals or moderates. In fact, he has even painted Black Lives Matters supporters, some of whom have held peaceful protests in parts of the 17th District, as the “enemies of America.”

In an Twitter thread published before the article was published, Parnell called this article a "hit piece" and said the whole point of the Fox Nation appearance was "to take controversial positions & argue them."

🚨Hit Piece Alert🚨
Just heard a left-wing blogger is writing about a TV segment I did before running for office.
Un-PC is a tongue-in-cheek comedy show, the WHOLE POINT of which is to take controversial positions & argue them.
Read on for my statement and the video clip ⬇️

The district voted for President Donald Trump by about a 2.5 point margin in 2016, but has shown many signs of moving left since then, including that Lamb won his 2018 general election race by more than 12 points against former U.S. Rep. Keith Rothfus (R-Sewickley).

Lamb’s campaign manager Abby Nassif-Murphy said in a statement to Pittsburgh City Paper that “the video speaks for itself. Our opponent just moved into the district, so we’re glad voters are finally learning who he really is and what he really believes.”

Parnell, who moved from Cranberry to Ohio Township in March, went on to talk in the Fox Nation appearance about his own failed marriage, and he criticized women on Instagram who post “duck-billed selfies,” in an apparent reference to women making a pouty face. He called the selfies “narcissistic.”

“Maybe they got the study wrong,” said Parnell. “Maybe it is just now there is an entire generation of men that don’t want to put up with the BS of a high-maintenance, narcissistic woman.”

Parnell has been endorsed by Trump several times, and his campaign outraised Lamb last quarter. However, the Cook Political Report still ranks the district as “likely Democratic” and, as of now, predicts that Lamb will carry the district fairly easily.

Considering the districts shift to the left since 2016, and the district’s embrace of other female candidates like Lissa Geiger Shulman (D-Hampton), state Rep. Valerie Gaydos (R-Aleppo), and state Sens. Lindsey Williams (D-West View) and Pam Iovino (D-Mt. Lebanon), Parnell’s comments about women could come back to haunt him.

“This idea that success of one is at the expense of the other, really does drive a wedge between men and women,” said Parnell. “And you can blame it all on feminists.”