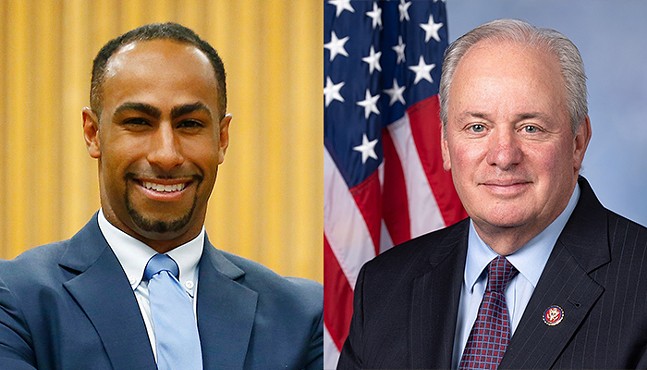 Jerry Dickinson (L) photo by Jared Wickerham, Mike Doyle (R) photo from his official Facebook page.
Updated: Fri., May 8 at 2:45 p.m.
In a press release, the NAACP Pittsburgh Branch announced that Rep. Mike Doyle has accepted an invitation to a Congressional Town Hall Forum hosted by the organization. Doyle had previously declined the invitation, citing an inability to settle on a date due to his uncertain congressional schedule.

Doyle faced criticism from his opponent, Jerry Dickinson, who emphasized the importance of discussing the racial disparities in the region now, when the pandemic disproportionately affects Black communities.

The debate will be held on Thu., May 21. The candidates will also face off in a debate hosted by the League of Women Voters on May 19.

The Pennsylvania primary was originally set for April 28, but amid the pandemic, the election day was pushed to June 2. The change inadvertently created an extra month of campaigning, which some candidates are taking full advantage of.

On Tue., May 5, Jerry Dickinson, congressional candidate for the 18th district, held a press conference announcing that his opponent, incumbent Rep. Mike Doyle (D-Forest Hills), declined an invitation to a debate hosted by the National Association for the Advancement of Colored People (NAACP) Pittsburgh Branch.

In a press release and during a Zoom press conference, Dickinson said he was disappointed that Doyle declined to participate in a debate that was focused on issues affecting the Black community. Doyle, however, says that he did not decline the invitation outright, but told the NAACP he couldn't commit to a date for the debate because the congressional schedule is undetermined amid the coronavirus.

"I’m extremely disappointed in Congressman Doyle’s decision to turn down debate on the pervasive racial disparities in this district, which he has represented for the past quarter century," said Dickinson in a press release. "I know firsthand the important progress the NAACP continues to achieve for equal protection of the African American community."

In response, Doyle also expressed disappointment in his opponent, this time saying that Dickinson misrepresented his response to the NAACP's invitation.

"It’s disappointing that Jerry Dickinson is distorting the letter we sent to the NAACP and leaders in the African-American community," said Doyle in a statement. "I would love to commit to a date to participate in the NAACP forum, but that is impossible at this time because of the uncertainty of the Congressional schedule surrounding the response to the Coronavirus."

Doyle says he would "gladly commit" to an NAACP debate once his schedule is more certain.

Dickinson and Doyle are set to face each other in a debate hosted by the League of Women Voters on May 19, which will air on WTAE on May 20.

In response to the NAACP's invitation, Doyle sent the organization a two and a half page letter outlining the ways he has supported Black communities in Pittsburgh throughout his 25-year career, citing his spot on the Black Maternal Health Caucus, his efforts to expand rehabilitative prison programs, and his support for funding of programs that give fair housing to Black homeowners and renters.

Still, Dickinson says that Doyle not participating in the debate is indicative of the representative not giving enough attention to his Black constituents.

"Today, as we know, this is one of the least liveable regions for African Americans and therefore we need to have a debate and have a discussion about these very issues," said Dickinson during the press conference. "We need to use this congressional seat as a bully pulpit to address these racial and social disparities, and a debate would be the form to do that."

The NAACP invitation for a virtual debate was delivered on March 12. Dickinson accepted the invitation on March 13 and Doyle sent his letter declining on May 1.  Doyle's response letter, which was provided by both Dickinson and Doyle, shows that he wrote to the organization that "The Congressional schedule is in flux and we could be called back at any time" and that it would be "impossible for [him] to commit to a date at this time."

On May 7, the NAACP Pittsburgh Branch released an open letter to Doyle, addressing the situation. The letter states that the organization originally received a "verbal acceptance" of the debate invitation and tried to set a date several times to no avail. They say they were "quite shocked" to receive Doyle's letter, and chided him for also sending the letter to "other prominent Black Pittsburghers with no apparent affiliation with the NAACP or the other cosponsoring organizations."

"In light of the disproportionate impact of the pandemic on communities of color throughout the nation, it is more, not less necessary to address these underlying issues before they further cripple our community," wrote the NAACP. "A dialogue must be had on how our candidates plan to move forward out of this particular crisis without leaving Pittsburgh’s vulnerable Black community even more behind."

The letter concluded by extending another invitation to Doyle for debate.

During his press conference, Dickinson also announced an African American Leadership Platform to address issues around housing, education, healthcare, criminal justice reform, and how he plans to "aggressively fight and tackle and address the racial disparities throughout this region."