Conflict over Bloomfield’s Little Italy Days festival is coming to a head. Where does it go from here? | News | Pittsburgh | Pittsburgh City Paper

Conflict over Bloomfield’s Little Italy Days festival is coming to a head. Where does it go from here?

When Bloomfield resident Bruce Chan walked into Pleasure Bar on May 20, it looked like a typical Monday evening. A few old-timers were sitting at the bar watching TV and drinking beer. But when Chan walked into the back room, which was packed with neighborhood business owners, residents, and organizers, he knew he was in for a unique experience.

The crowd of 30-40 people were there to get details about this year’s Little Italy Days festival. The four-day event in August shuts down most of Liberty Avenue in Bloomfield to vehicles each year, offering pedestrians access to hundreds of booths. The festival is meant to honor Bloomfield's Italian heritage, but over the last several years it has expanded to include many non-Italian and non-local vendors. There’s a bocce court and some Italian businesses with booths, but there are also large music stages where rock bands perform, and vendors hawking pizza, chicken fingers, and even windows for your home.

But clearly, some residents and businesses are ambivalent about the festival. To start, unlike most neighborhood festivals in Pittsburgh, Little Italy Days is run by an event-planning company rather than a nonprofit or community group. And the requirements for putting on a festival like this are fairly easy to meet, meaning businesses can make large profits off the events with little oversight. Bloomfield Development Corporation (BDC) wants to see changes made to how the festival receives input from residents and businesses. More questions are being raised about the benefit of the festival, which is why the May 20 planning meeting drew one of its biggest crowds to date, including a mix of supporters, critics, and representatives of elected officials. But Sal Richetti, the event’s organizer, is hesitant to adopt BDC’s requests, saying he makes changes when they are requested personally. He says the festival is integral to Bloomfield and brings in a lot of money for local businesses as is.

With so many different opinions about the impact of the festival, Chan says eventually the meeting got “a little heated.” Many residents have lamented the disruption the festival brings, as thousands of people from outside Bloomfield descend on Liberty Avenue to drink and party. Bloomfield businesses seem mixed on the impact of Little Italy Days, with some praising the additional customers it brings and others complaining about the loss of business it causes. Some even close up shop during the four days to avoid the festival. Meanwhile, Richetti has defended Little Italy Days as a financial and social success, and a staple of Pittsburgh’s summer festivals.

“You did get some of that emotion,” says Chan, noting some shouting between attendees at the May meeting. Chan recently became a board member of BDC, but he wasn't affiliated with the nonprofit development group when he attended the meeting. “All of us have heard the pros and cons of Little Italy Days. This was the first time for me seeing that play out in a public forum.”

According to Little Italy Days' website, the festival started in 2002 to “celebrate Bloomfield’s Italian heritage, and create a destination spot for Italian-themed entertainment and food.” Richetti says he was asked to take over as event organizer in 2012 because the festival was losing money. Shortly thereafter, he started making changes to make Little Italy Days more financially viable.

Richetti, who owns an event-planning business called Big Day Entertainment, started to run the festival like he would any major event with the goal of making a profit. 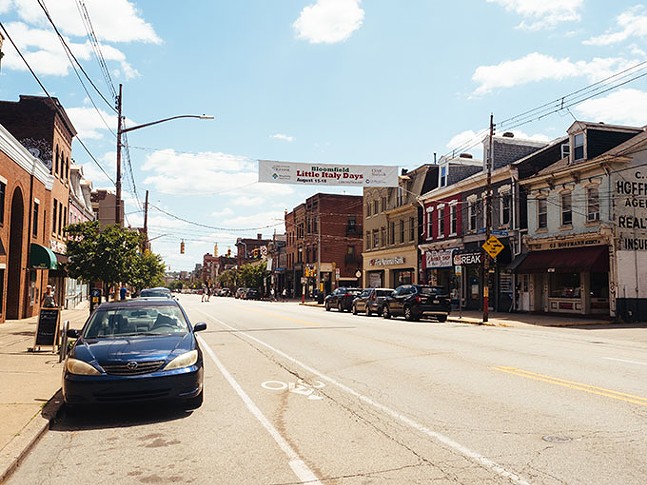 Since Richetti organizes Little Italy Days through his private businesses, figures on how much the festival brings in aren’t available to the public. Bloomfield businesses are charged discounted rates if they want to set up a booth on the street, but still pay between $495-895 for the festival, or $124-224 per day, not including tent rental. The majority of booth spaces come from non-Bloomfield businesses, however. Those festival rates run from $595-1,495 for non-food vendors to $850-1,895 for food vendors. Richetti says this year’s festival has about 200 booths, and, with the rates charged to vendors, the profits for his business are likely significant.

Richetti says Caliente Pizza & Drafthouse is renting seven booth spots for this year’s festival, meaning the business is paying between $4,000-6,000 for street space. (Editors note: Richetti reached out to CP and said that Caliente does not pay that much for their booths. He says he "cuts deals with local businesses," and that Caliente paid "only one fourth" of the amount stated here.) Other large-scale neighborhood festivals typically charge lower rates. For example, the Squirrel Hill Night Market, which shuts down sections of Murray Avenue, charges $105 for a booth per night. Little Italy Days also attracts corporate sponsorships from UPMC, Highmark, Allegheny Health Network, and First Commonwealth Bank.

Bloomfield resident Sarah Hamm says the festival has become a logistical pain and doesn’t offer “anything unique that you can’t get at a standard county fair.” She says she and her partner avoid the festival at all costs.

“Little Italy Days might bring people to the neighborhood, but it doesn’t speak to what the neighborhood’s actually like,” says Hamm. “Instead it just exacerbates all our problems.”

Pittsburgh City Paper spoke to businesses on Liberty Avenue to get their opinions on the state of Little Italy Days. Maria Merante runs a small Italian shop and kitchen and says she loves the festival. She says the festival is not really an Italian festival anymore, but it's a good street festival for her business.

“We do one month's equivalence of business in four days,” says Merante. “You won't hear me saying anything bad.”

Rock Mori, who runs Rocky’s diner, says overall the festival is good, but he wishes there were more communication about the festival from the organizers. He says the meetings the organizers hold to inform businesses about Little Italy Days are held at hours many local business owners can’t attend.

An employee at Baby Loves Tacos says the staff goes on vacation during Little Italy Days, and the restaurant won't be open during the festival.

The BDC conducted a survey in 2019 to gauge how local businesses were reacting to the growth of Little Italy Days, which at that point had really started to expand compared to 2012. BDC board member Josh Rolon says they started having concerns about the footprint and impact of Little Italy Days because of the survey results. 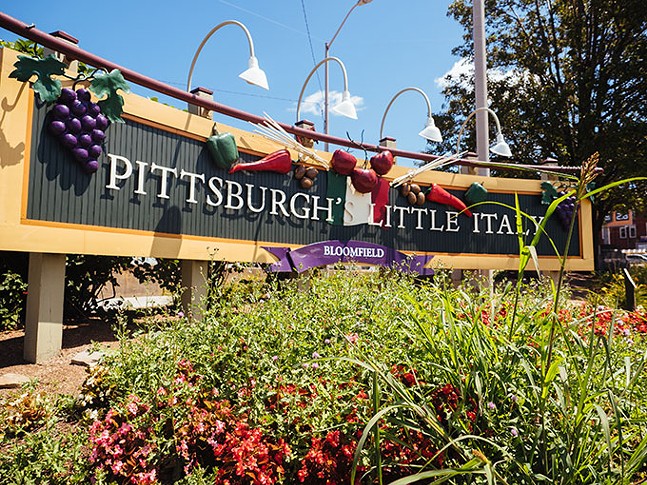 When asked why they closed down, the six businesses said there was poor access to their storefronts caused by the festival and many customers weren’t sober enough to patronize their business. Only three out of the 25 respondents said they rented a booth for Little Italy Days.

Rolon says BDC isn’t against Richetti continuing to run Little Italy Days and very few people have reached out to BDC saying they want the festival to end. He says the main changes BDC would like to see are improved communication and more community meetings for the festival.

Rolon says Richetti should follow some of the guidelines that Registered Community Organizations follow. He would like to see a more official process to how Richetti receives input from residents and business owners. He says it could be similar to how community development meetings are held in Bloomfield.

“The community is engaged and thoughtful on development, why not do the same thing for this large festival?” says Rolon. “For a development, you are worried about all these different factors, Little Italy Days touches a lot of those points.”

Rolon says currently the community-input process for Little Italy Days is too informal and not transparent enough.

Richetti says he’s open to any comments and that people can personally call or email him with requests. He says suggestions led him to increase seating at the festival. Richetti also rejects the BDC survey, calling it “bogus.”

But Rolon says a more official planning process for Little Italy Days is necessary, given the size and length of the event. He says Richetti should hold a large community meeting before sending in his permit applications to the Special Events Committee.

Pittsburgh City Councilor Deb Gross, who represents Bloomfield, says she thinks it’s curious that Pittsburgh special event policies allow a for-profit company to take over such a large part of the neighborhood for a festival.

There appear to be no rules regulating large-scale special events. Private businesses, community groups, and nonprofits can throw just about any kind of festival they want, as long as they meet security and clean-up criteria. The permits are approved by Pittsburgh’s Special Events Committee board, which is made up of city and police officials.

So as long as the board approves, an event the size of Little Italy Days doesn’t have any requirements in terms of community benefits or charitable giving. Gross says most large-scale festivals that take over public space in Pittsburgh are typically run by nonprofits or charitable organizations.

“If you are going to propose a neighborhood festival, then the neighborhood groups maybe should be organizing it,” says Gross. She is also open to looking at possible legislation to reform the special event permitting process, with mid-size festivals like the Polish Hill Arts Fest on one track and large festivals like Little Italy Days on a different track with possibly more requirements to meet.

For the last several years, Guy Costa, an open advocate of Little Italy Days and friend of Richetti, was the chair of the Special Events Committee. Costa recently retired from his position with the city government and no longer sits on the Special Events Committee board. Richetti says Costa is now working on his team. Costa was at the May 20 meeting.

Richetti says there is no conflict of interest concerning Costa’s involvement and that “he treats everything professionally.” Richetti says Costa knows the festival and sees the benefit of Little Italy Days.

Richetti also says he has given to Bloomfield causes, including free booths for neighborhood churches, grants that he gives out after the festival, and money he has given to the neighborhood Halloween parade. He says Little Italy Days is integral to the neighborhood and he will personally help any business that has concerns about the festival. He is open to holding a post-Little Italy Days community meeting in November but bristled at the idea increased formality could better communications or improve charitable donations.

“If I was saying that I didn’t do Little Italy Days, people would be upset,” says Richetti. “For the businesses that say they don’t benefit, come talk to me. I will help you market.”

Even though there’s disagreement on how Little Italy Days should be managed moving forward, Chan is optimistic about the future of the festival.

“At the heart of it ... people do want it and do love the festival,” says Chan. “What I think people want is a Little Italy Days 2.0, one that really included the community.”