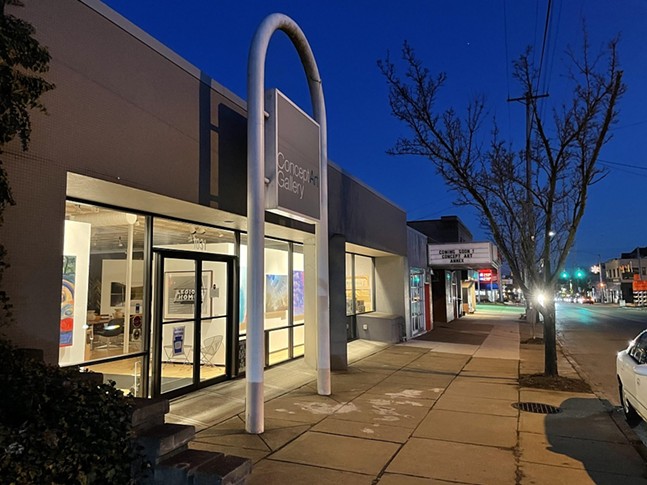 On Thu., Feb. 25, it was officially revealed that Concept had purchased the shuttered theater from its previous owner, the Pittsburgh Center for Arts and Media. Regent Square Theater sits right next door to the gallery and auction room on South Braddock Avenue.

The gallery plans to use the additional space to set up two Project Spaces for artists, additional exhibition space, and a larger photo studio, as well as more office and storage space, according to a press release.

“We are thrilled to increase our footprint in Regent Square, the neighborhood that has welcomed and supported us since the beginning,” says gallery co-owner Alison Oehler. “It is exciting to envision the possibilities that this additional space will afford us. We are especially pleased to have additional exhibition space to show artwork and develop relationships with emerging artists.”

Concept was originally founded by Mel and Carolyn Berkovitz in 1972 and has since displayed and sold work by local, national, and international artists.

Oehler says they are beginning the design phase with their architects and plan to host a grand opening of the new space to celebrate Concept's 50th anniversary next year.

“We hope to begin to program the two storefront spaces on either side of the main theater space in the next few months,” says Oehler.

Concept co-owner Sam Berkovitz says the gallery was fortunate to experience a “growth phase” over the course of the pandemic, and that, coupled with its online auction business, required an expansion.

“In the early years, our market was primarily local and we could only reach bidders via print advertising,” says Berkovitz. “Today, we sell our consignor's property to five continents in real-time sales with bidders participating on their computers and telephones.”

Oehler adds that the Regent Square space will no longer serve as a movie theater, but could potentially show films that are part of art installations.

The acquisition may come as a disappointment to Edgewood residents and city film fans who were hoping that Regent Square Theater would continue operating as an independent movie house. The historic theater, which opened in 1936, has seen its share of struggles over the past few years, starting with being shut down temporarily after experiencing technical issues. The final blow came in 2019 when the Pittsburgh Center for Arts and Media  —  which absorbed the theater's original owner, Pittsburgh Filmmakers  — closed the theater and laid off its film programming staff, along with other employees, as part of a sudden restructuring plan.

A variety of bidders showed interest in buying the theater, including Brian Mendelssohn, owner of the Lawrenceville-based Row House Cinema. A group of residents also briefly floated the idea of buying it as a way to keep it going as a community theater.

Oehler assures that under Concept's ownership, the former Regent Square space will still be available to the community in many ways.

"We plan to use the two storefront spaces and the lobby space as exhibition space that would be open to the public during the same hours the current gallery space is open," says Oehler. "We hope to use some of the existing theater space for storage and additional office space for the gallery, as well as for a larger photo studio for auction and inventory photography."