Community advocate Amber Sloan speaks out about her harassment charges 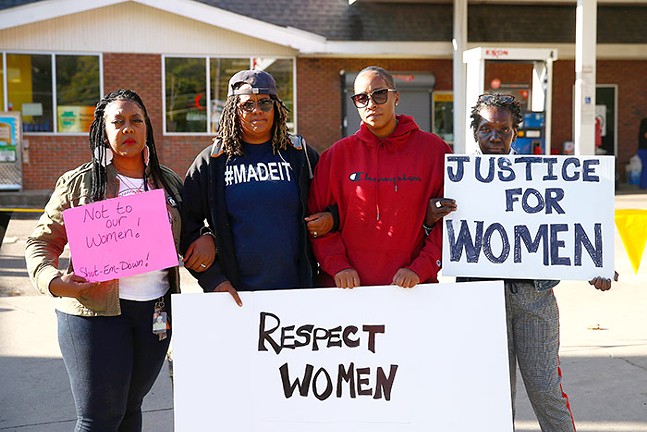 Amber Sloan is a well-known community advocate who has been involved in organizing efforts for Antwon Rose II and other racial justice events. She is also well-respected as a voice for the LGBTQ in Pittsburgh’s Black community.

On Sept. 20, three men — two gas station owners, and one employee — got into an altercation with two customers, both Black women, allegedly over spilled gas. The altercation escalated and then the three men punched and hit the women several times, including throwing them to the ground and slamming one of the women into a pole.

The men were charged with simple assault. Advocates and Pittsburgh City Councilors wanted those charges increased. And continued protests have engulfed the Exxon gas station.

During one of those protests, Sloan was videotaping herself on Facebook live while talking to her friends and fellow activists. According to the criminal complaint against Sloan, she can be heard in the video saying, “I put a post up, and I said two people shot out in Homewood today. All these killers out here. We need some of y’all out here. Y’all should be hunting down that white man, Scott Hill, and killing him, if y’all want to do something. But, yeah, it wasn’t nothing bad. Ya know, so I’m blocked out from my main page."

Sloan is facing a summons for misdemeanor harassment in relation to those posts, which were first shared publicly by KDKA radio’s Marty Griffin.

“Everything was taken out of context.”

Today, she spoke to City Paper in an effort to clear the air around her case.

Sloan says the comments shared on Facebook and in the media are being taken out of context. She doesn’t deny saying what she said and wouldn’t comment on if she regrets using that specific language, but says that her conversation was clearly in a group setting, and was not directed intentionally at Hill, the gas station employee.

“Everything was taken out of context,” says Sloan. “You can tell it is a group of us talking.”

Sloan says she was referencing shootings in Homewood that had happened the day before she posted her video, and that she meant to say that she wishes anger that leads to shootings in Pittsburgh’s Black community, would be redirected to protests and social action against Black inequality.

“When are you going to stop killing each other and fight the real fight?” says Sloan, explaining how she wanted her comments to be interpreted. “To the African-American community, they understand what I was saying.”

Lawyers Patrick Nightingale and Turahn Jenkins are representing Sloan and were present for the call with CP. Nightingale believes that Sloan’s comments didn’t represent a direct threat.

“We believe here that the comments were not meant to be communicated to the person and were hyperbolic in nature,” says Nightingale. “There was simply no intent to communicate that to the individual.”

He also cites a Supreme Court case, United States v. Watts. In 1969, an 18-year-old was heard at a Vietnam War protest saying, "If they ever make me carry a rifle, the first man I want to get in my sights is L.B.J.” referencing President Lyndon Johnson. The man was convicted of violating a federal statute that makes it a crime to "knowingly and willfully" threaten the life of the President. The Supreme Court reversed his conviction, noting the “language of the political arena ... is often vituperative, abusive, and inexact."

Nightingale and Jenkins believe the charge against Sloan violated her First Amendment rights.

Sloan feels that Griffin’s reporting went over the line and unfairly targeted her, noting that threats are made against people on social media all the time, including many that were made when protesters were blocking traffic following the death of Antwon Rose II.

For example, in a July 4, 2018 tweet about protesters blocking traffic in Mount Lebanon, one user replied to a WTAE reporter writing “enough is enough what Mt Lebo have to do with any of this... Time for the water canon !!!”

Enough is enough what Mt Lebo have to do with any of this... Time for the water canon !!!


“Look at these racist comments,” says Sloan. “If you are gonna charge me, then are we going to start charging these comments?”

Earlier this year, Mayor Bill Peduto increased his security detail in response to threats that were made both online and off. No stories about charges against any of those threats have been reported.

Jenkins says the stories about Sloan’s charges and the charges themselves are an attempt to discredit her character.

“If you look at history [of] when people speak out, there is always going to be character assassination,” says Jenkins. “Amber is doing a lot for her community.”


Sloan wishes some more context would have been provided in the stories about her charges. Sloan has been a consistent advocate in the community, leading, organizing, and participating in marches, protests, and gatherings, including advocating for people in Homewood to utilize bike-share programs and talking to the Black community about LGBTQ rights. She is also a Democratic Committee Member for Pittsburgh’s 12th ward.

She did say she learned one lesson from the whole experience. She says she won’t record at protests and events using Facebook Live anymore. But overall, she says the charges against her are not going to alter her advocacy.

“They tried to shut me up because they charged me,” says Sloan. “I know my city needs me, I am not gonna let my community down."