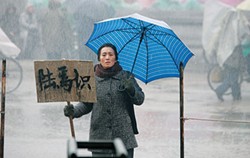 Yu (Gong Li) waits for her husband to come home

Noisy battles get plenty of attention. We are relieved when the tumultuous times end, but in moving forward, there can be a tendency to disregard lingering traumas. The past is over — but, of course, it never really is.

This unresolved psychic aftermath is the space that Chinese filmmaker Zhang Yimou explores in Coming Home. It’s a quiet, well-acted melodrama, adapted from a section of Geling Yan’s novel, and decidedly more small-scale than Zhang’s notable earlier work: 1990s art-house favorites like Raise the Red Lantern and To Live, and later martial-arts spectacles such as Hero and The House of Flying Daggers.

Coming Home begins during the Cultural Revolution. Yu (Gong Li) is a teacher, and her teenage daughter, Dan Dan (Zhang Huiwen), is angling for the lead in a propagandist ballet titled “The Red Detachment of Women.” Complicating matters is the fact that Lu (Chen Daoming), Yu’s husband and Dan Dan’s father, has escaped from prison, where he has been held for undisclosed crimes against the state. If either should encounter Lu, officials warn, they should immediately turn him in, or face dire consequences — an admonition each woman responds to differently.

But most of the film takes place after the Cultural Revolution. Lu has been “rehabilitated” and released, and he openly returns home. But it is to a broken family: an adult daughter who never knew him, and a wife suffering from trauma-induced amnesia who fails to recognize him. Events of the past have also estranged mother and daughter.

In some ways, Coming Home could be a classic Hollywood studio melodrama (in which amnesia was a popular, if inexplicable, narrative catalyst), where we watch to see if true love can restore memories and mend broken relationships. But Zhang’s work also functions on other levels. It is a critique (if somewhat oblique) of the Cultural Revolution, its rigidity, corruption and even capriciousness, that resulted in millions of intimate tragedies like this one.

And so too is it an allegory about China, a country that has moved on rapidly from the days of the Cultural Revolution, but remains scarred by those times. How does a nation process a devastating history — with wounds that defy healing, even when things have supposedly returned to normal? Institutional amnesia is no solution.

But Zhang’s film finds light in this post-revolution pain. His characters are damaged, but there can still be growth, forgiveness and an admirable resiliency. This shadow-shrouded present is brighter than the dark past, but viewers should still pack plenty of tissues.