Comic-Tanium explores the science (and pseudo-science) of superheroes

From Captain America to Spider-Man, an exhibit links comics characters to real-life research

Comic books are well-known violators of the laws of science. It'd be impossible to consume the calories necessary to run at the speed of The Flash. An infant Superman wouldn't still be an infant after traveling the light years from Krypton. And an onslaught of radiation as a source of superpowers? Cancer is much more likely.

Nonetheless, the ToonSeum is using the colorful world of comics as a gateway to lessons about real science. The exhibit Comic-Tanium: The Super Materials of the Superheroes features seven modules, each containing a replica of a well-known superhero's gear, created by the Warrendale-based Minerals, Metals and Materials Society. Alongside is actual science info about the iconic character's abilities, presented science-fair-style in digestible tidbits.

The exhibit is the brainchild of Suveen Mathaudhu, an assistant professor of mechanical engineering at the University of California, Riverside, and a comic-book fanatic. As a Department of Defense scientist, Mathaudhu became a real-world equivalent of childhood idols like Bruce Banner, the Hulk's alter ego, and Tony Stark, the man beneath Iron Man's armor. "I am aware of the pseudo-science in comics," says Mathaudhu in a phone interview. "Still, they got me interested [in science]." 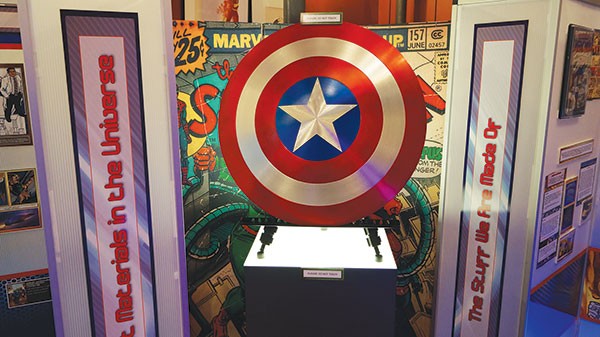 A few years ago, he was in Pittsburgh for a conference and stopped by the ToonSeum. He later suggested the concept.

His favorite module showcases a replica of Captain America's shield. It's made of a nimble but indestructible metal called "vibranium," and the side text discusses the military's search for an actual strong, lightweight alloy for vehicles. "The [U.S.] military is the largest consumer of fuel on the planet," says Mathaudhu, "so they've been very interested [in] finding some strong material that can provide better fuel economy."

(Mathaudhu also says the shield provides one of the most flagrant examples of comic-book pseudo-science: The military scientist who created it had no idea how to forge another, thus explaining its uniqueness. "There's no reason why a scientist would forget his own research," he scoffs.)

The Spider-Man module focuses on his web-shooters, and inspires a lesson on how industrial scientists are trying to replicate useful materials from nature, investigating abalone shells' remarkable ability to absorb impact and trees' century-spanning strength. Batman and his array of high-tech equipment provided an entry into how computers aid research, and the X-Men's frenemy Magneto was an obvious segue into magnetic materials.

Each module spotlights a member of the Minerals, Metals and Materials Society who is doing related research. "From my perspective, these are the actual ‘heroes' of Comic-Tanium," says Lynne Robinson, the show's designer and a contributing editor for the Society.

She says that, even if comic-book physics aren't perfect, the stories relay the importance of science to young minds. "In Iron Man 3 for instance, Tony Stark describes himself as an ‘engineer,'" she points out. "That's really his power and it's what actually saves the world at the end of the movie."

Even if that "extremis" exploding gunk made no sense.