Madness in the Message deconstructs the news. 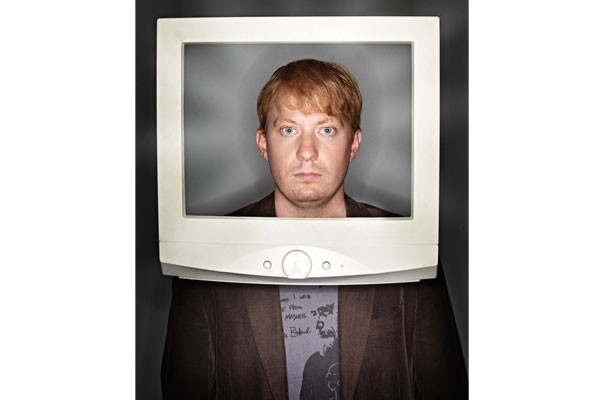 Photo by Brian Kaldorf
Ron Placone wants to help you escape your TV.

THE MADNESS IN THE MESSAGE: START TALKING

Ron Placone recalls the time he was interviewed by CNN. A camera crew asked him about an incident at a club where he was doing standup-comedy gig. But the footage wasn't used, and CNN later apologetically told Placone why: Apparently, the unassuming Pittsburgh comic looks too much like a serial killer.

"That's OK," Placone replied. "It's the first time anyone at CNN's been honest with me."

Video of Placone telling the story onstage opens Madness in the Message: Start Talking, his new one-man show about how mass media is undermining democracy. Placone calls the hour-long show "an edutainment performance piece." It blends lecture, storytelling and videotaped comedy sketches to explore: corporate consolidation; the homogenization of media; and how media manipulates messages. It premieres June 23 and runs monthly through September at Steel City Improv Theater.

Placone says that the problem is that our media is profit-driven, with news serving shareholders, not the public. "Our media is pretty much up for sale to the highest bidder," he says in Madness.

Moreover, thanks to corporate mergers and lax regulations, the majority of our media are now owned by just a handful of mega-corps. (Think Comcast, Time Warner and Disney.) That disconnects media from real people and real places. And, Placone says, such companies know they'll attract the most eyeballs by presenting "news" that privileges scapegoating over analysis, and anecdote over real reporting.

If this sounds rather heady for a standup comedian — even one as busy as Placone — well, he has a degree in this stuff. The Forest Hills native, 27, just earned his master's in rhetoric and communication from Duquesne University. Madness in the Message even shares its title with an independent-study project he completed at Duquesne; Placone presented the scholarly paper at the 2012 convention of the Eastern Communication Association, in Cambridge, Mass.

Placone's interest in media criticism predates his professional comedy career. In 2004, communications classes at Indiana University primed him for the fevered rhetoric of that year's presidential campaign. He also got into Robert Greenwald's Fox News expose Outfoxed, not to mention The Daily Show and British satirist Charlie Brooker (How TV Ruined Your Life). And the new show's title nods to famed theorist Marshall McLuhan.

Placone began doing standup seriously when he lived in Seattle. After the recession began (costing him the freelance writing and editing work that paid his bills), he returned to Pittsburgh for grad school in 2009. Now the Swissvale resident largely supports himself with regional comedy gigs. His one-minute comedy-news segment "Thoughts, Rants & Cold Coffee" is featured in outlets including web-based New Dissident Radio, and his writing appears in the Huffington Post Union of Bloggers. (Sample Placone headline: "Congress Push for ‘No Fat Chicks' and More as Recognized White House Mottos.")

Much of Madness involves Placone simply talking about things like the history of American media: In the early Republic, for instance, cities had mulitiple partisan newspapers because it took little capital to start one and their owners didn't expect profits. Placone also includes short video interviews with local radio personalities Lynn Cullen, John Phillips and Mike Wysocki, discussing the ill effects of the federal Telecommunications Act of 1996. The act weakened caps on how many radio or TV stations a single corporation could own. Thus arose Clear Channel, the talk-radio behemoth and Rush Limbaugh employer that owns more than 850 radio stations (and is itself owned by none other than former Mitt Romney employer Bain Capital).

Madness also includes homemade comedy videos. In one skit, to illustrate how media scapegoating works, Placone frets over a mishap at a comedy show in which a customer was injured. He solves the problem by blaming a "contractor" — his web-designer, who wasn't even at the club.

Other videos visit "Monopoly Metropolis," a fictional town where a media mogul (Placone) molds public opinion with the help of a pliable journalist. A parody of a public-service ad, for instance, mimics anti-drug PSAs to demonize energy drinks for the benefit of the mogul's soft-drink-industry pals.

So where does Placone get his news? His preferred sources include Alternet, an online clearinghouse for independent media.

Meanwhile, the Telecommunications Act notwithstanding, he's less interested in reforming media legislatively than in helping people recognize its manipulations, and the powers-that-be behind it. "You kind of have to be your own filter," he says.

"People need to demand a more deliberative, citizen-driven media in the United States," he adds. "When [that] becomes more and more commonplace, policy follows."

Partly, that can mean people creating their own blogs and podcasts. But another solution is simpler. Mass media drives us apart by instilling fear and apathy, says Placone. To break the cycle, "I encourage people to get out in their community more."