He’s not exactly Bortsch Belt, but there’s a weirdly charming old-fashioned vibe to his whole act 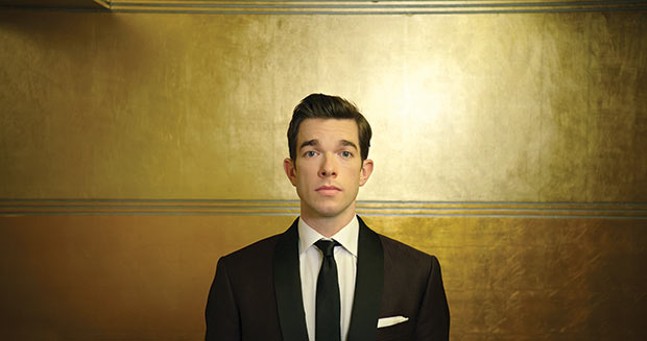 Photo courtesy of Netflix
Not a robot: John Mulaney

John Mulaney isn’t the first comedian to perform with a musician on stage — Hannibal Buress had a DJ for years; Mitch Hedberg had his stand-up bassist — but bringing a Grammy award-winning producer and composer and his wurlitzer on stage for a Radio City Music Hall special is something new and unexpected. But it’s a good call.

Jon Brion, producer behind Kanye West’s Late Registration, film scorer for Boogie Nights, Eternal Sunshine of the Spotless Mind and Lady Bird, has provided music for Mulaney’s past two specials. He composed the intro for Mulaney’s 2015 stand-up special, The Comeback Kid, with an oddly pensive and downbeat orchestral piece. It was a far cry from the lets-get-amped opening music you might expect of a comedy show. Then Brion joined Mulaney on stage for his most recent Netflix special, Kid Gorgeous, and once again, sets up a weirdly solemn and melodramatic vibe for the performance.

“The first theaters were cathedrals and they had organs, and the Chicago Theatre does have one of the original Wurlitzer organs. That’s why there’s kind of a dirge when you’re pushing backstage to [Brion]’s score,” Mulaney told Splitsider in 2015.

“It is funny how you talk about it, because it’s a lovely score with a little tension, and that’s how it felt arriving at the Chicago Theatre that night.”

If you’ve been following Mulaney’s career, as a writer for Saturday Night Live, in his short-lived sitcom Mulaney, or as a standup, his taste for old-fashioned performance tricks should come as no surprise. He’s not exactly Borscht Belt, but there’s an old school sense of class to his well-tailored suits, ornate theaters, and original classical scores. It creates an effective contrast to his personality, which, if the word “kid” in his past two titles didn’t tip you off, can be fairly silly and unimposing.

That aesthetic comes into focus in a bit from Kid Gorgeous, where Mulaney points to the irony of web security measures in having to convince a robot that you are not a robot. After the setup, he takes on a vaudevillian voice and starts imitating the CAPTCHA robot in rhyme: “You look and you type what you think you see! Is it an E or is it a 3? That’s up to ye. The passwords that passed, you correctly guessed, but now it’s time for the robot test!”

You can, and should, stream Mulaney’s past three stand-up specials (New In Town, The Comeback Kid, Kid Gorgeous) on Netflix now.