Misdirection and off-tempo punchlines are some of Magwood's strongest tools. 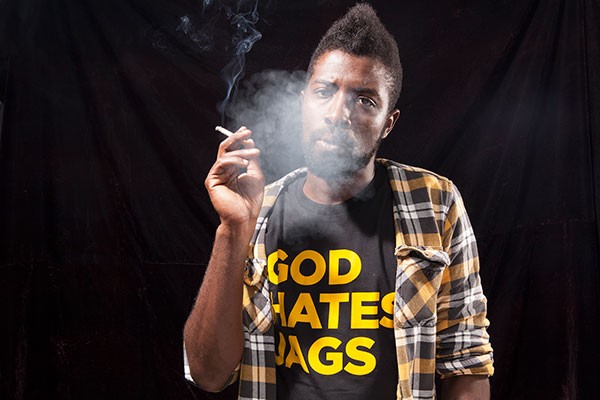 Photo by Heather Mull
Where there's smoke: Davon Magwood fires it up.

Curse his hometown and Davon Magwood will not hesitate to hump you. And if the Westboro Baptist Church shows up to picket his homecoming show, on Aug. 10 at Club Cafe, he says, he'll do just that.

In May, the Pittsburgh comedian took on the homophobic Kansas-based group when he tweeted to his more than 33,000 followers, "I bet if you burned down the westboro baptist church the tornados in the midwest would stop ... I just have a feeling they will."

In response, WBC offshoot GodH8sTheWorld tweeted, "How's Pittsburgh doing, btw? We're praying for God to pls smack that evil city," and WBC itself vowed to picket. In July, Magwood promised: "If this tweet gets 100 retweets, Augs 10th I will hump one member of the westboro baptist church @WBCSays in a thong!" It was retweeted 159 times. GodH8sTheWorld responded: "God will mock & curse you sir if you even try! #Perv."

Magwood doesn't expect any actual WBC picketers; at press time, the event was not listed on the group's official picket schedule, and WBC has not responded to CP's inquiries. But Magwood is happy that at least some good will come from the dispute.

For Magwood's fans, the WBC exchange is no surprise: He's all about controversial, uncomfortable subjects, and he has a keen skill for disarming them.

In February, Magwood self-released his debut comedy EP, Yeah I Said It. Then he booked his first headlining tour — from venues to openers — on his own, mostly hitting comedy clubs and dive bars. Magwood played 20 gigs in two months. His goal, he says, was to come home with stories, and he got them. Highlights included a Santa Convention in Kalamazoo, Mich.; a lengthy traffic stop in Arizona; and a new Batman tattoo, inked in Texas.

Magwood, 27, has a casual, conversational style that shrugs off traditional setups and punchlines, in the vein of Hannibal Buress (for whom Magwood opened at Mr. Smalls in February). Misdirection and off-tempo punchlines are some of his strongest tools. A joke might start with a late twentysomething's rant about friends starting to have babies, and just as effortlessly end on the subject of baby dragons. It's all in how you get there.

Raised in Bloomfield, Magwood grew up interested in politics and social justice. In high school, he did marching band and youth politics: Magwood was class president his senior year at Schenley High, and was the 59th Youth Governor of Pennsylvania.

Bullied in school, Magwood still sticks up for those who are bullied. And he enjoys confronting bullies like WBC.

"They are jags, and when I see a jagoff, I call them out," he says.

Some argue that sparring with WBC only gives the organization publicity; most estimates place WBC's total membership well under 100. Indeed, Magwood has 10 times the Twitter followers of GodH8sTheWorld — which once tweeted to thank him for "publishing our message for us."

But Magwood says numbers can deceive.

"They're getting support somewhere," he says. Moreover, bigotry is bigotry: "It's happening to people in our own city. [They] make it harder for the people we love."

Despite the new audiences, new adventures and fresh publicity, this tour wasn't easy for Magwood. He's endured a breakup, canceled shows and the rigors of life on the road. And in mid-July, one of Magwood's best friends, local comic Sean "Rudie" Rush, took his own life. He was 25.

Like Magwood, Rush suffered from depression throughout his life, and he used that pain in his act. Look up his Skittsburgh set on YouTube; it's painfully funny in a bone-dry, Mitch Hedberg kind of way.

"I used to work for a funeral home, but that's a dead business," says Rush. The crowd responds with a mix of groans and chuckles, with a single "ha!" louder than the rest. That's Magwood.

Rush was scheduled to open for Magwood at Club Café. But now the show is more than a homecoming gig. It's even more than a chance to stand tall with the LGBT community and flip the bird at WBC. This is Magwood's opportunity to say goodbye to his friend, and work through the pain the way he always does: on stage.