CP photo: Megan Gloeckler
Colony Cat Cafe in February 2020
After three years of providing Pittsburghers with caffeine, food, feline companionship, and almost 350 adoptions, Colony Cat Cafe in the Strip District has announced it will be closing at the end of this month.

In a Facebook post on Sunday evening, owners Sue and Erik Hendrickson said the state-mandated coronavirus closure "proved to be something from which we couldn't financially recover."


Since opening in February 2017, the cafe offered coffee, wine, and a food menu on the first floor, with a glass-enclosed mezzanine called "the Cat Loft" on the second, where a dozen homeless cats were visited by patrons who paid $8 an hour to reserve time to hang out with the feline companions.

All of the cats in the cafe, who had free range to roam in the loft 24/7, were available for adoption through Animal Friends, who the Hendricksons thanked on their post: "Their ongoing commitment to companion animal welfare is critical to the communities in Western PA and beyond." As recent as this March, the cafe was averaging about two adoptions per week. 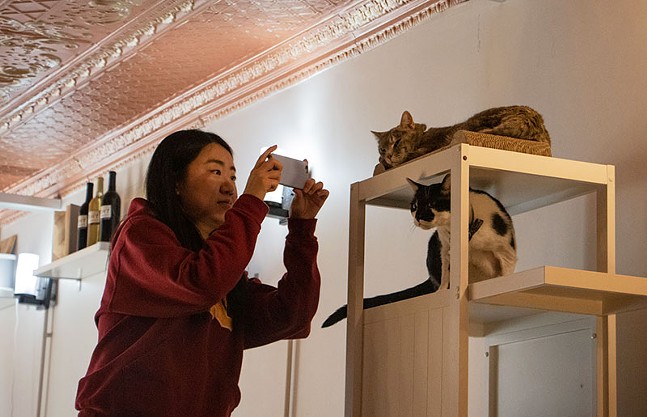 CP photo: Megan Gloeckler
Colony Cat Cafe in February 2020
"We are grateful to every Cat Loft guest, to those who have adopted, and to the big-hearted people who went out of their way to patronize Colony because they believed in our mission," the post continued.


In addition to offering food and drinks, the cat cafe also had a store where it sold merchandise and cat-covered clothing, bags, and trinkets, including a cat-shaped "purrogi" enamel pin. In the Facebook post, the cafe said they'll be having a going-out-of-business sale, tentatively scheduled for Sat., May 16. 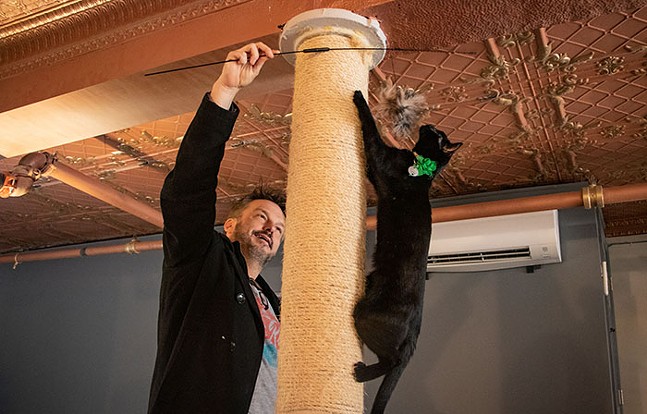 CP photo: Megan Gloeckler
Colony Cat Cafe in February 2020
The cafe also announced a new occupant for the Penn Avenue location this summer: Cafe Liminal, a gluten-free restaurant currently located in Smallman Galley, a food hall in the Strip District which plans to expand later this year. (Smallman Galley's lease will fully end in six months, following an extension that ended at the end of February and was not extended, according to the Pittsburgh Business Times.)

"I was humbled when Eric and Sue reached out and asked if I would consider the space for our expansion plans," Cafe Liminal owner Anthony Curtis tells City Paper. "They are amazing people, and you can see how much they gave to the Colony project and the community when you read the comments on their post today."

Colony Cat Cafe was the second local restaurant to announce its closure over the past few days. On Friday, Alexander's Italian Bistro, a Bloomfield staple for over 60 years, posted that it too was closing its doors.


"As the chapter closes on Alexander’s, we take with us the most full heart," wrote Kim Colaizzi Ifft to Alexander's Facebook page. "A heart full of memories, and laughter, and now tears. We are blessed to call everyone of our customers our friends, and we thank you for keeping us at the heart of Bloomfield for all of these years."