CP Photo: Kaycee Orwig
Arina Prakapenka
As it became clear that virtual learning would continue through the fall of 2020, many college students decided to take a gap year, aka a year off from formal education. The University of Pennsylvania in Philadelphia saw a 300% increase in the number of students who deferred or took a gap year, and at the University of Pittsburgh, the number of first-year students who deferred jumped from the typical 30 to 167 — a more than 450% increase.

The students who chose to attend the fall semester contended with keeping up with virtual or hybrid classes, not being able to fully access the facilities they paid for, and trying to balance school with the stresses of living during a pandemic. Instead of taking on the same stresses in the spring, some students opted to take a gap semester.

“I want to say that [the University of Pittsburgh] did the best that they could with the situation that they were given, but I found a lot of stuff lacking,” says Pitt student Dakota Rose Kuhn.

As a transfer student majoring in English literature and minoring in women’s studies, Kuhn encountered connectivity and communication issues with virtual advising that she says led to unhelpful suggestions.

“I feel like it would have been easier to talk to [my advisor] in person versus over the phone and, like, glitchy service and stuff,” Kuhn says. “If I had taken her suggestion, I would have wasted thousands of dollars and a semester’s worth my time.”

Virtual classes were a deciding factor in many students’ decisions to take a gap year. Students who spoke to Pittsburgh City Paper said that many professors weren’t given time or support from the university to make the adjustment to virtual learning, so while they say professors should not be blamed, students still are not retaining as much as they might during in-person classes. For many, the reduced quality in education was no longer worth the cost of a full-time student tuition.

Oliver Qin, a junior at Carnegie Mellon University, didn’t take a formal gap semester, but he became a part-time student and is taking one class, along with doing research. He admits it “sounds a bit dramatic,” since he might have taken a quasi-gap semester regardless of COVID-19 but says, “the third factor of lower quality of online courses, I think that was the last straw in a way.”

Qin is a statistics and machinery major and, for many of his classes, office hours are vital to staying on top of his coursework. While office hours always had queues, being there in person allowed him to talk to other students, whereas the transition to remote schooling created an extra barrier to receiving help. This, in addition to the other drawbacks of virtual learning, convinced him to take a quasi-gap semester.

His other two reasons were the financial strain of being a full-time student, as well as the flexibility that the reduced course load allows. Without a full class schedule, Qin says he now has time to work on personal projects such as building apps and Chrome extensions, as well as building video games in Unity, a video-game development platform.

For Pitt junior Arina Prakapenka, deciding to take a gap semester was a culmination of financial considerations, the reduced engagement and quality of virtual classes, and a desire to pause and reset her priorities. She recently switched her majors from Russian and chemistry to Russian and political science with a focus on international relations, and she plans on using her gap semester to get more involved with local community organizations such as Pittsburgh Mutual Aid, Jailbreak Pittsburgh, and SisTers PGH.

“There was, like, that little bit of time where I was able to slow down [at the start of the pandemic], and then everything opened up again, which it shouldn't have,” says Prakapenka. “I think I wanted to use this semester as a continuation of that break that I had in the beginning of the pandemic, where I'm able to kind of just be by myself with my own thoughts and do what I would like to do.” 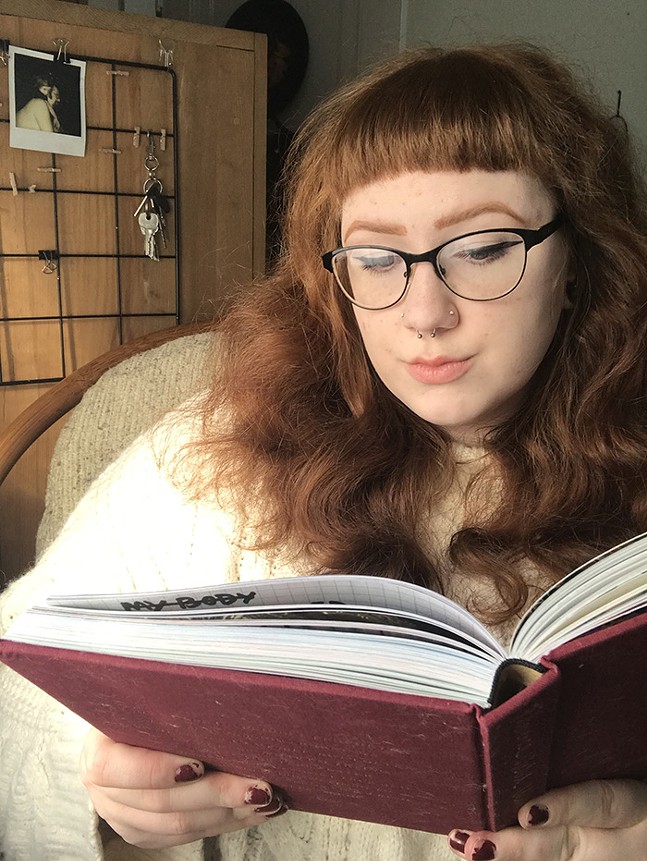 Photo: Courtesy of Dakota Rose Kuhn
Dakota Rose Kuhn is taking time during her gap semester to read for pleasure, something she doesn’t often get to do during the school year.
In addition to volunteer work, Prakapenka is studying for the LSAT so she can go to law school and pursue a career as an international human rights lawyer. She’s also working as a licensed cosmetologist at Salon Beleza in Mt. Lebanon, where she’s helping take over clients from a co-worker who recently left. While working has been important for Prakapenka, she’s also taking time to focus on her mental and physical health.

“A big part of it was my health,” Prakapenka says. “I've had this chronic pain since the beginning of the pandemic, and I haven't had the time to deal with it properly, and I knew that I was really stressed out, which was not helping.”

Kuhn has also found a balance of working and caring for her mental health during her gap semester. Although she struggled with mental health prior to the pandemic, between the election and the pandemic, the fall semester was difficult to finish. Now, Kuhn works from home as a home health aide and spends her time on activities she doesn’t typically have time for while taking classes.

“Because I'm not in school, I've been able to take more time for working out, actually making meals that I wouldn't otherwise,” Kuhn says. “And I've been reading a lot more than I get to normally because I don't usually get to read for pleasure when I'm in classes. So that's been a nice change of pace.”

Gap semesters, however, have to come to an end at some point. Before the pandemic, both Qin and Prakapenka took summer classes in addition to their typical fall and spring courses, which led to burnout that contributed to the desire for a gap semester but has also given them more flexibility in their remaining course load.

Qin’s plans to return rest on whether he is able to take a graduate-level class on virtual reality that is only offered in the fall, and Prakapenka plans on returning to classes in the summer so she can hopefully study abroad before she graduates next spring.