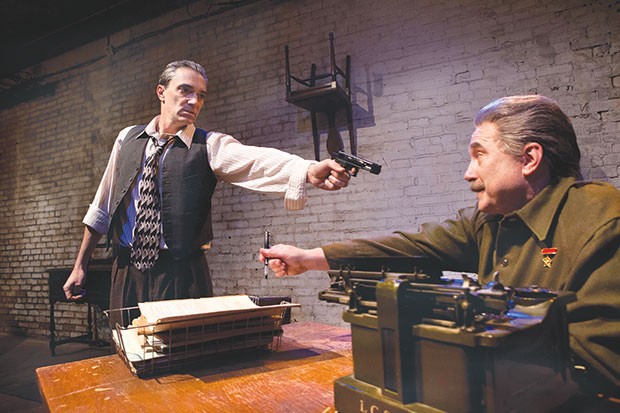 continues through April 30. Quantum Theatre at 6500 Hamilton Ave., Larimer. 412-362-1713 or quantumtheatre.com
Sometimes reality has a way of catching up to art. Quantum Theatre has been eyeing John Hodge’s Collaborators for four years, and announced it as the finale to the current season last May — well before the history-upending election. But the surreal 2011 comedy about the dangers of having a sense of humor in fearsome times now has new resonances.

For his first play, Hodge (best known as a screenwriter for Trainspotting, among other films) dips into the real history of Mikhail Bulgakov, a dissident playwright in the USSR before World War II. Though Bulgakov has problems getting his works published, let alone staged, Josef Stalin is a big fan. The particulars of their relationship blossom in Hodge’s imagination.

Jed Allen Harris gleefully directs a talented cast, led by the mercurial Tony Bingham as Bulgakov opposite the deceptively jovial Martin Giles as Stalin, and Dana Hardy as the former’s increasingly fearful wife. There are some real sparks in the married couple, contrasted with the hard dissonances between the men, veering from silly to chilling. Ken Bolden has an unusual turn as a villain who gets the threats churning. As his fellow scary secret policeman, Joe Rittenhouse has little dialogue, but his distinctive profile is all the language he needs.

Others in the cast are showcased in multiple, often layered roles: John Shepard as a couple of doctors and an even shadier driver; Mark Stevenson as a winsome aristocrat and actor-as-Moliere; Jonathan Visser as a tortured young writer; Dylan Marquis Meyers as an unlikely flatmate and the actor playing young Stalin; Nancy McNulty as another worried roommate; and Olivia Vadnais as sundry sexy ladies.
The production, staged in an old Larimer warehouse, also mines the wealth of an extraordinary design team: Susan Tsu, costumes; Narelle Sissons, set; Joe Pino, sound; C. Todd Brown, lighting; and technical director David. J.M. Bielewicz.

The word “collaborators” can have various meanings: people working together to create something, perhaps art, or else a person betraying his fellows by working with the enemy. Consider both the modus operandi of this historical fantasy. Think and enjoy.