Beneath the surface crime story some big, and problematic, issues are explored, in this noirish indie 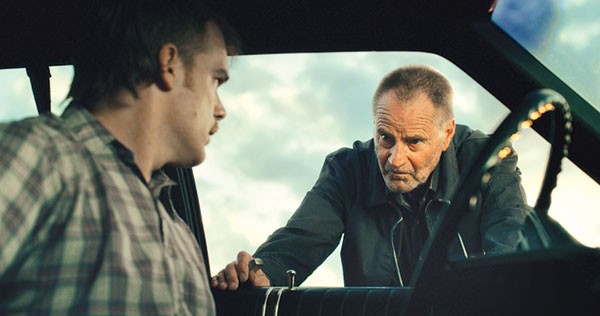 Of vice and men: Michael C. Hall and Sam Shepard

An accidental shooting transforms one man's soul in the indie drama Cold in July, from Jim Mickle. When surprised by an intruder late at night, Richard Dane (Michael C. Hall) shoots him dead. Dane is unnerved and guilt-ridden, especially when others in his small East Texas town express support. He even attends the burial, where he and his family are threatened by the dead man's father (Sam Shepard). But things aren't as clear as they seem, and the arrival of a private detective (Don Johnson) sends the story in an unexpected direction.

The story is set in 1989, and Mickle's film is reminiscent of indie noirs from that time about ordinary men whose lives unravel after the smallest thread gets loose. (The film is adapted from Joe R. Lansdale's 1989 novel.) Beneath the surface crime story — and the occasional bit of mordant humor — some big, and problematic, issues are explored: what it means to be a man, to be a father, and the often hazy distinctions between justice and revenge.

Mickle has a good grasp on his actors and the material, keeping the pulpiness between the lines — things only get baroque in the last reel. But it won't be the big finish you remember so much as the little moments, like those when Hall, Shepard and Johnson just sit around saying nothing.