Cocktails should be fun

If beer and wine are the bread and butter of American imbibing, then cocktails are the banana split 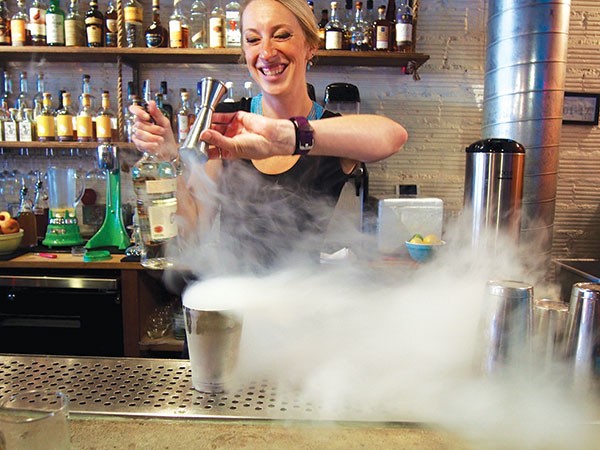 CP photo by Drew Cranisky
Hidden Harbor’s Sarah Clarke mixes up a cocktail with dry ice.
Amongst craft-cocktail cognoscenti, the 1970s and ’80s are generally regarded as the nadir of mixology. It was an era of sticky-sweet shooters and oversized martini glasses filled with neon concoctions, a time when an order of an old fashioned might get you watery whiskey with muddled maraschinos. In those dark days of American cocktailing, more time went into dreaming up titillating names than putting a thoughtful drink in your glass.

A few years ago, the now-defunct Pittsburgh Cocktail Week issued a challenge to the city’s bartenders: Create a modern spin on one of those much maligned “disco drinks.” For one glorious week, Pittsburgh was awash in Harvey Wallbangers and Long Island Iced Teas that featured local craft spirits and all manner of house-made tinctures and syrups. The drinks were colorful, creative and often ridiculous. And while a Slippery Nipple might not be the most erudite order, it captures something that the craft-cocktail renaissance too often ignores: fun.

In the 1990s, bartenders around the world rediscovered bygone classics and began to invent new ones. They strapped on their sleeve garters and got serious about mixing drinks — perhaps a bit too serious. At stuffy cocktail lounges and faux speakeasies, pretension and snobbery flowed as freely as the liquor.
If beer and wine are the bread and butter of American imbibing, then cocktails are the banana split: an indulgent, celebratory, delightful treat. Cocktails should come with a smile, not a lecture. These days, bartenders are marrying that ’80s sense of fun with the values of the cocktail revival, which taught us the importance of fresh juice, quality ingredients and proper technique.

Here in Pittsburgh, a playful spirit is alive and well at bars across the city. Smallman Galley, for instance, recently gave its cocktail list a baseball-themed overhaul, creating a menu that’s as loaded with nerdy baseball jokes as it is with delicious drinks. Try the Bobby Bonilla’s Tortillas, a margarita variation made with corn-chip-infused mezcal.

Other bartenders are working unexpected ingredients and techniques into classic cocktail templates. At Troy Hill’s Scratch Food & Beverage, Mandi Crosby also mixes up a mezcal margarita: Hers is sweetened with an IC Light Mango simple syrup. At Franktuary, bar manager Jake Cox is experimenting with molecular techniques to create an entire cocktail contained in a large sphere. And at Spencer Warren’s sporadic PopUp Embury series, everything from boozy gummy bears to Pop Rock garnishes are fair game.

But nothing blends serious cocktail chops with a strong dose of whimsy like the wide world of tiki. Stop by Weird Science Wednesday at Squirrel Hill’s Hidden Harbor for drinks that unite childhood treats with wacky science projects (oh, and oodles of rum). If tiki-fied Dippin’ Dots and cartons of clarified milk punch don’t sound like a good time, I don’t know what does.