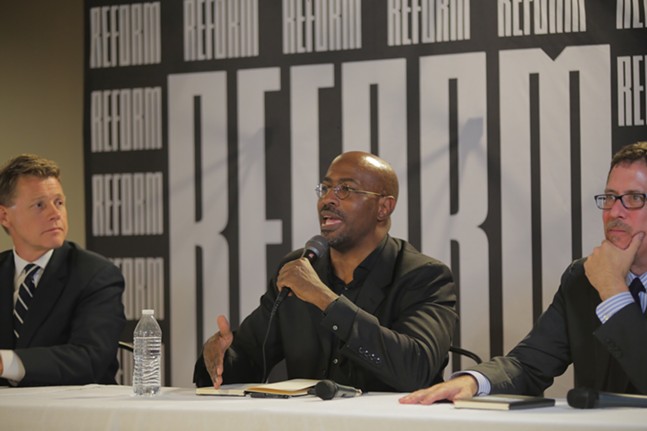 Nearly half of the entire population under correctional control in Pennsylvania— in federal prisons, state prisons, local jails, youth confinement, involuntary commitment, parole, and probation — are on probation.

For criminal-justice reform advocates like CNN anchor Van Jones, this number is untenable. On Monday night, Jones and his advocacy Group REFORM Alliance, which is co-founded by Philadelphia rapper Meek Mill and has predominant names like Jay-Z and Patriots owner Robert Kraft on the board, hosted a panel discussion in East Liberty to talk about these high rates and how to lower them.

“Nobody can defend the status quo of the current probation system,” said Jones to the crowd of about 50 people at Repair the World in East Liberty.


What an incredible discussion last night in Pittsburgh, PA on the @REFORM Academy Tour. We spoke about the positive impact that “smart probation” legislation (#HB1555 & #SB14) will have in Pennsylvania. If you want to join the fight, go to https://t.co/FHi70G2Od3 and sign up... pic.twitter.com/XWwBJMTT2f

Gainey said that instead of punishing people for supervision violations, Pennsylvania could be offering them incentives to avoid returning to prison.

“If we are truly the land of second chances, why aren't we giving people proper incentives?” said Gainey.

To help lower the probation and parole rates in Pennsylvania, Gainey, Jones and the REFORM Alliance are advocating for House Bill 1555 and Senate Bill 14. These concurrent bills would impose caps on probation sentences, limit prison time for convicted misdemeanors, eliminate and limit vague probation conditions, and reward people for good behavior by lowering probation sentences.

The REFORM Alliance says this would significantly reduce the number of people under supervision and allow Pennsylvania to invest more funds into rehabilitation instead of re-incarceration.

Jones said that this bill and other criminal-justice reform bills he has advocated for have significant bipartisan support. Both HB 1555 and SB 14 are co-sponsored by multiple Republican and Democratic state lawmakers. Jones said even former Republican Sen. Rick Santorum, who Jones works with at CNN, is supportive of the bill.

However, more Democrats in the state legislature support this effort and the bills would have to pass chambers controlled by Republicans, including state House Speaker Mike Turzai’s chamber. But Jones is confident though that once lawmakers learn about the probation numbers and the millions of dollars that can be saved, it won’t have a hard time passing through the legislature.

“The lawmakers haven't really heard about this from the people,” said Jones. “But once they do, you can’t defend it. So we need to educate people.”

Jones noted that many people thought the recent federal clean slate bill would also have trouble passing under a White House controlled by President Donald Trump, but it did anyway.

“If Donald Trump can hear the voice of ordinary people, then anyone can,” said Jones.

In the end, Jones said that the bills will only become law if Pittsburghers and Pennsylvanians demand them.

REFORM Alliance is holding another event today at 7 p.m. at the Bethel Park Community Center in Bethel Park.