The name Fortis reflects the boldness of "us young underdogs." 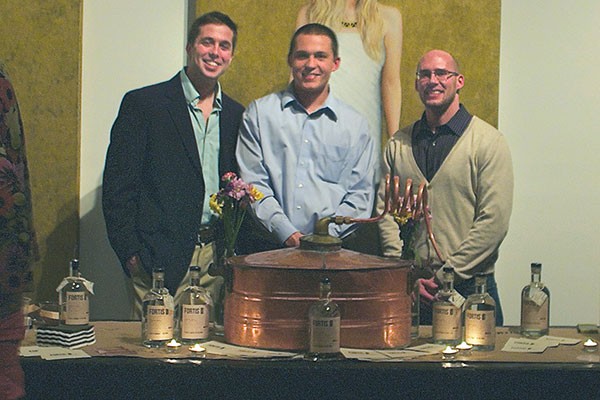 Carnegie Mellon University is renowned for producing next-generation robots, world-famous actors and ... top-shelf booze? Maybe not quite yet, but adding to CMU's legacy for innovation is the plan of Doug Heckmann, Anthony Lorubbio and Casey Parzych.

The trio established Midnight Madness Distilling last year during an undergraduate entrepreneurship class. Originally, they planned to distill absinthe, but quickly realized they could take an earlier step before diving into the complexities of the Green Fairy.

"I tried the neutral spirit that we were making, and as soon as I tasted it I realized we could make some great vodka," says Lorubbio, the company's CEO.

That vodka is named Fortis — a name that Lorubbio says reflects the boldness of "us young underdogs to move into this industry."

Fortis is distilled from fair-trade, organic sugar cane — an unusual starting point for vodka. (The sub-tropical grass is generally distilled into rum's potent first cousin, cachaca.) However, thanks to an innovative filtration system designed by head distiller Parzych, Fortis is a smooth, neutral spirit with just a hint of sweetness, grass and vanilla.

Parzych, who also serves as the company's president, says he originally intended to follow his passion as a homebrewer. (In fact, two CMU-founded microbreweries are set to open in the upcoming months.) He says that as he got deeper into the mechanics of making booze, he discovered that he "liked the engineering of distilling a little more than brewing," because it was more challenging.

Pittsburgh will be the only market for the vodka — at least for the moment. "We're 100 percent focused on Pittsburgh right now. We love the people here," says Heckmann, who manages the company's sales strategy.

By press time, the guys were barnstorming bars all around the city. In the near future, vodka lovers will be able to special-order a bottle of Fortis online (at $24.99 a bottle) at www.finewineandgoodspirits.com, for pick up at a state store.

And if all goes as expected, the trio will release their absinthe sometime this summer.