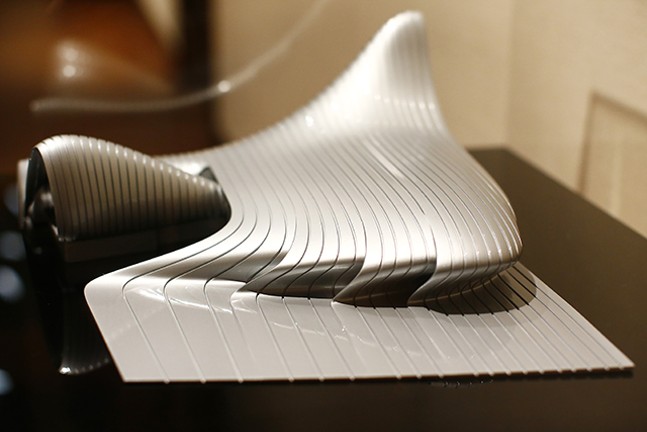 At first glance, Influencers: The Pritzker Architecture Prize at the Heinz Architectural Center seems like just one exhibit. But really, it's several — some of the pieces complement each other, others seem simply irreconcilable.

The Pritzker Prize, celebrating its 40th year with this exhibit, was initiated to elevate the prestige of architecture by recognizing lifelong achievement in producing built work. So, in one way, casual visitors can be confident that they're getting a comprehensive overview of excellence in the profession.

Come in for some local familiarity: Philip Johnson’s William Granger Ryan Fine Arts Center (1979) is an unbuilt project for Seton Hall in Greensburg, represented here by a charming toy-like wooden model whose pieces fit precisely in an accompanying box. And Gordon Bunshaft’s modernist Office and Research facility (1988) for Pittsburgh’s own H.J. Heinz Company is shown in a 1958 photo by Ezra Stoller with moody, dusk lighting that leaves the lobby, gridded windows, and delicate skybridge aglow.

Stay for international stars whose buildings are distant, but represented with compelling immediacy in the show’s artifacts. Oscar Niemeyer’s Ibirapuera Canopy of 1950 in São Paulo, Brazil, photographed by Leonardo Finotti in 2007, is shown in a huge color photo print. It is one of the most remarkably intimate yet sweeping images of sheltered architecture at the edge of a landscape (designed by Roberto Burle Marx) that you will see.

There’s plenty of fine work. One problem, though, is that it has been an old boys’ club. Zaha Hadid didn’t come along until 2004, when the Iraqi-born British architect was the first woman to receive the award. 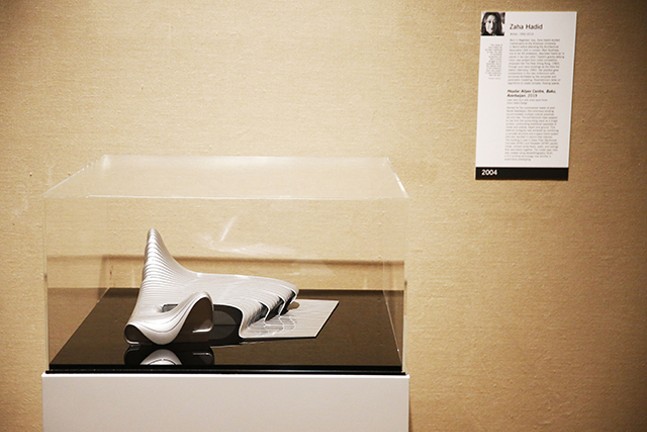 The exhibit includes a model of her Heydar Aliyev Center, a concert hall and cultural center in Baku, Azerbaijan. In this building, a concrete structure and space frame system create an otherworldly column-free interior, and nearly every panel, in glass-fiber reinforced concrete or polyester, is unique. This is an exquisite little model of a project that, as winner of the London Museum’s Design of the Year in 2014, is especially well-known and, true to the exhibit’s title, influential.

Appearances aside, this object did not simply land from outer space. Curator Ray Ryan lobbied and coaxed Hadid’s firm in order to add the model to Heinz Architectural Center's collection. While some objects come from the museum’s department of decorative arts and others from the department of photography, plenty of this exhibit is here because of Ryan’s individual campaigns over the years to secure important works from illustrious offices. Other examples include the photos of the recently departed Kevin Roche (1982) with models and complete construction of the Ford Foundation (1965, 1968), the astonishing masterpiece of enclosed space and interior landscape on 42nd Street in New York.

Here, the sense of multiple perspectives on the exhibit is especially acute. Hadid's Azerbaijan project memorializes a repressive dictator, the government forcibly evicting residents so the building could be constructed.

And however pristine his Atheneum (1981) in New Harmony, Ind. may be in a black and white photo by Stoller, Richard Meier recently retired suddenly in disgrace over allegations that he sexually assaulted employees.

Also, regardless of Hadid's achievements, only women in pairs or groups have won the Pritzker since. And the committee managed to honor Wang Shu in 2012 while appallingly neglecting his partner, the cofounder of his firm, Lu Wenyu.

I don’t want to police the Pritzker prize; there is plenty to enjoy in this show. But the recent trend to recognize architects with more of a sense of social conscience, such as Alejandro Aravena (2016), does not help sufficiently with problems of sexism and racism that are baked into the profession. (Any winners from Africa or the African diaspora, such as the odds-on favorite Sir David Adjaye, architect of the National Museum for African American History and Culture on the Mall in D.C.? Not yet.)

In other shows, HAC manifests its social conscience and desire for public engagement admirably in a variety of exhibits and activities, such as in the recent Building Optimism on Public Space in South America, or the series of HAC Lab exhibits that enfranchise visitors in creating and exhibiting work

Influencers is admirable and enjoyable in so many ways. But it needs a more palpable acknowledgement that while Pritzker honors leading architects, the prize has a lagging sense of what leadership in architecture needs to be.