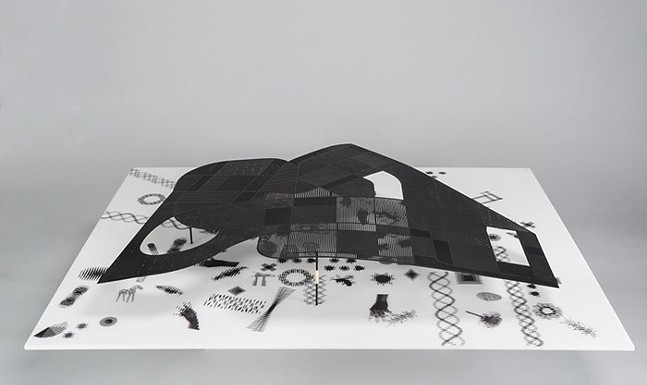 Photo: Courtesy of CMOA
TheGreenEyl; Connective Field by SO-IL, part of Fabricated Landscape at CMOA
There was a time when architectural design dismissed the role of humans and the surrounding environment. Heinz Architectural Center curator-at-large Raymund Ryan points this out as we explore Fabricated Landscape, a new exhibition at Carnegie Museum of Art. He describes modernist architectural renderings of past projects as being “lifeless.”

“Often, there are no people,” he says. He then gestures to displayed works by the London-based firm Assemble, including a dollhouse-like model, an overview of a Liverpool neighborhood, and a children’s book-style drawing commissioned by French illustrator Marie Jacotey, all of which feature occupants or passersby. “So, this is almost the opposite.”

On view through Jan. 17, 2022, Fabricated Landscape is described in a press release as asking “What does it mean for architecture to have a civic consciousness?” The exhibition tries to answer this question with a look at 10 architectural practices from around the world, all of which “embrace a new sense of urgency regarding nature and the planned environment from how and where we live to how we engage with the world around us.”

The array of models, prints, textiles, installations, and more also expands the potential and varied interests of architects. 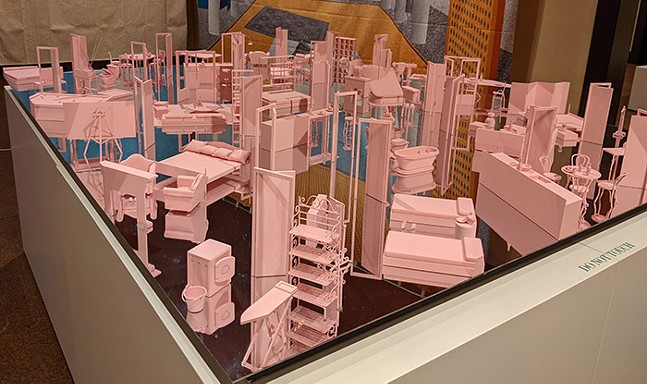 CP Photo: Amanda Waltz
“The Grand Interior” by MAIO, part of Fabricated Landscape at CMOA
In a field that favors the 50 and over crowd, Fabricated Landscape deliberately represents younger, forward-thinking talents, with every architect being born in or after 1975. Doing so demonstrates how this new generation values collaboration and the needs and character of a community, unlike architects of the past, who, unfairly or not, are thought of as chasing god-like status by seeking out only the most extravagant, high-profile projects, regardless of their impact.

As a result, visitors are introduced to thoughtful social housing plans in Liverpool, where Assemble has worked to save existing homes in the run-down district of Toxteth, and in León, Mexico, where New York firm SO-IL developed “Las Americas Social Housing."

While it could be seen as just another apartment complex, Ryan points out how “Las Americas Social Housing” — on display in the museum as a model — was designed to combat the highly populated city’s urban sprawl. It also forms a figure-eight to promote flow, not only in terms of how people move throughout the building, but in terms of air circulation, an important asset in a city as hot as León. The piece touched on other beneficial aspects of the project, including that the building materials would be produced in the city, creating jobs and lessening the carbon footprint of construction.

CP Photo: Amanda Waltz
Fabricated Landscape at CMOA
What struck me most was the effort to avoid disruption, as the chosen architects appear far more concerned with reusing, reinventing, or building on, as well as creating spaces that are more flexible and democratic. This comes through in Assemble’s contributions and those by the studio of Dutch architect Anne Holtrop. “Murad Boutique Hotel” presents Holtrop’s effort in a three-dimensional form to showcase the preservation of a historic site in the Kingdom of Bahrain, while also expanding its potential use. “PORET Kindergarten” combines two- and three-dimensional works to demonstrate German architect Anna Heringer’s hut-like, ready-to-assemble kits, designed as an easy and familiar housing alternative for people in remote parts of Africa.

The color pink makes more than a few appearances, particularly in “The Grand Interior” by the Spanish firm MAIO. What at first looks like a random selection of Pepto-Bismol tinted miniatures sprawled across a mirrored tabletop actually investigates the role of private versus public space, and how they can co-exist, an idea conveyed by the many tiny doors. In MAIO’s print Public Space Systems, connected outdoor spaces are populated with clip art people playing out various narratives, as well as touches like a spaceship or the Nyan Cat meme. The firm’s apparent penchant for whimsy succeeds in making architecture less intimidating and more accessible to a general audience.

The mission of Fabricated Landscape expands beyond the built environment into nature with sustainable projects aimed at connecting with the surrounding environment. The puzzle-like work Shapes of the Forest by LCLA Office depicts ways to create unobtrusive civic spaces in an Oslo forest, all of which are carved out in an ivory-colored carpet sample. Series of photos show Pilotis in a Forest by Japanese architect Go Hasegawa and Ballen Houses, another LCLA Office project. The former — an elevated structure located three hours outside of Tokyo — features slatted floors and walls of windows meant to keep inhabitants close to the surrounding wilderness, its stilted legs mimicking the towering trees. The latter chronicles an ongoing project in El Retiro, Colombia, where small, custom houses are built to fit into the topography. 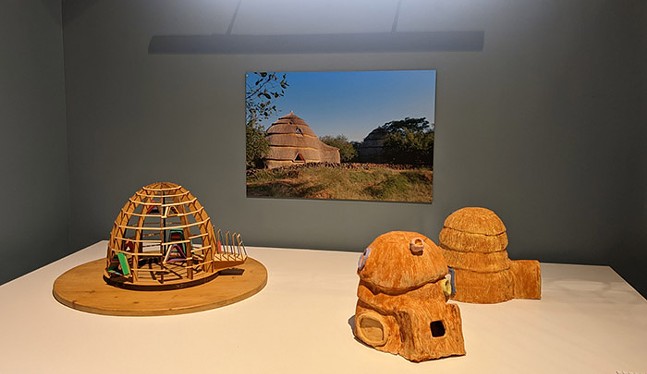 CP Photo: Amanda Waltz
“PORET Kindergarten” by Anna Heringer, part of Fabricated Landscape at CMOA
While architecture may seem disparate from other art forms, Fabricated Landscape sets out to show how it informs and is informed by other media. Everything from literature (a house by Office KGDVS was inspired by the Franz Kafka story “Der Bau”) to fine art (“The Grand Interior” takes cues from Marcel Duchamp) to photography (a series by Luisa Lamberi captures the finer details of Go Hasegawa’s Chapel in Guastalla) are represented here.

The most memorable of these are the textiles provided by Heringer, notable less for how they look than where they came from, as they were produced by Bangladeshi women and Rohingya refugees. These refugees are a systemically persecuted Muslim group in Myanmar devastated by genocide and displacement. The textiles demonstrate the architect’s role as not only an artist, but as an activist. The pieces providing income and a voice to those who produced them.

While conceptually dense and far-reaching, Fabricated Landscape highlights a more promising future for architecture defined by harmony in both the built and natural world. The museum will also release three consecutive publications — the first one, Domestic, is now available at the exhibition entrance — to assist visitors on their journey into this new frontier.
Fabricated Landscape. Continues through Jan. 17, 2022. Carnegie Museum of Art. 4400 Forbes Ave., Oakland. Included with museum admission. cmoa.org

Photographer to teach tips of trade to working artists in Sewickley