Clue: The Musical at the Summer Company

Stage version of the board game is lighthearted fun 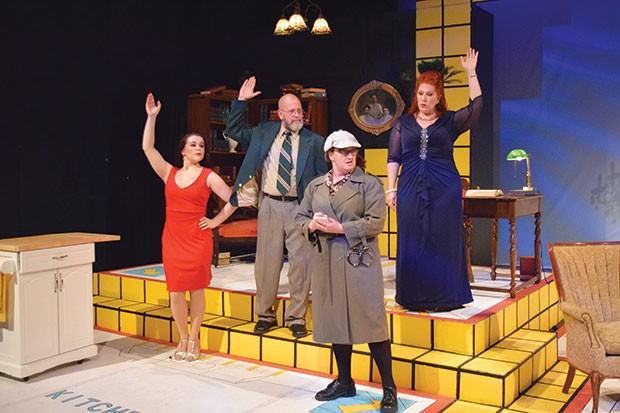 Clue, as a game, is timeless. Clue: The Musical, produced by the Summer Company and directed by Justin Sines, is a good time. Not deep. A bit cheesy. Fun.

It’s no surprise that the one-act evolved from a dinner-theater show before hitting it off off-Broadway in 1997. The six characters famous in the American version of the game Clue (Cluedo in its native United Kingdom, where it was developed by Anthony and Elva Pratt in the late 1940s) are fleshed out and in full voice. Relatively speaking. They’re still very two-dimensional, like so many of the inhabitants of whodunits in the intra-war “Golden Age” of mystery fiction.

The musical (book by Peter DePietro; music by Galen Blum, Wayne Barker and Vinnie Martucci; lyrics by Tom Chiodo) doesn’t really have a plot. The eight-person ensemble (nine counting on-stage musical director and pianist Brian Buckley) trots through a series of songs about betrayals, murderous ambitions and other light-hearted entertainments.

The ever-dependable Nathaniel Yost leads the way as host/victim Mr. Boddy. Then there are the usual suspects, of varying repulsiveness. Tonilyn Longo Jackson, as the sultry Mrs. Peacock, belts out her secret to success, “Once a Widow.” Samantha A. Camp, as housekeeper Mrs. White, embodies a dictionary illustration for the word “slovenly.” Katheryn Hess (Miss Scarlet) seems more ingénue than temptress. Of the male guests, Col. Mustard (Rocky Gettel, ladling campiness) exudes unrepentant macho; Mr. Green (Tom Strauman) ditto for slime; and Prof. Plum (Joel Ambrose) is so supercilious he even has a man bun.

Completing the cast, we go beyond the original game for the unnamed Detective. Sort of a lady version of comedian Arnold Stang, Jill Jeffrey dominates the second part as she trades barbs with suspects and steals the spotlight with stage business. The best part of the evening is her tango with Ambrose, “Seduction Deduction,” as they beguile each other with literary quotations (a ploy actually used by Golden Age author Dorothy L. Sayers — coincidence?).

While Clue: The Musical occasionally lags (the list of weapons becomes an annoying mantra), there are chuckles, bright colors (set by John E. Lane Jr., costumes by Jeffrey) and a prize if you play the game and win.