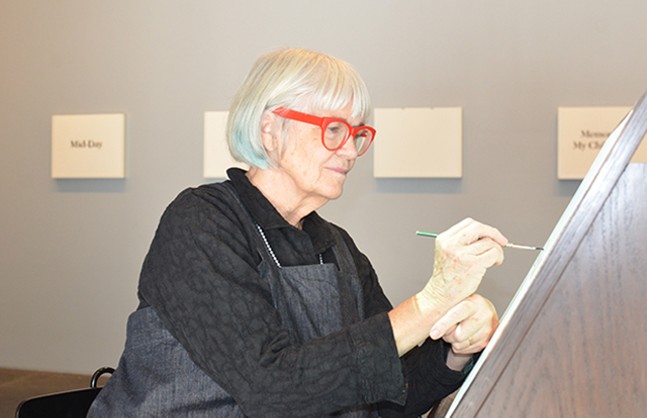 CP photo: Tereneh Idia
Linda was photographed at Carnegie International’s Fruit and Other Things by Lena Clayton and Jon Rubin.

"I am an artist who has earned a living with paintbrushes most of my life, world citizen, North Sider, and Casey Droege’s mother."

Wallen is currently participating in the Carnegie International project Fruit and Other Things, in which local artists create hand-lettered text paintings of works that were rejected for past exhibits. Each painting is displayed for a day, then given away to visitors.

Tell me what you’re wearing?

What I am supposed to wear, something dark, mostly black. We get to wear these special aprons that were made for our project. Red eyeglasses and we got permission to wear red shoes, so I don’t feel totally in a mausoleum. We consider this our escritoriom [desk] and we are monks - and it looks just like the escritoriom you see in Europe. We feel very monk-like but the red shoes help us feel less like monks.

Are you wearing anything that's a personal element, beyond the uniform?

My red glasses have become my trademark — these are 1984 vintage. They have come back in style.

Now, I am personally very jealous of your blue hair, that’s a look I want.

When I realized that my hair is mostly white, that was just a blank canvas. And so this is the color that works the best.

The red shoes, tell me about them.

They have different color elastic, from Spain. I bought them in Barcelona, one of my favorite cities in the world. Full of artists, it is really a cool place and Spanish shoes are really good, comfy shoes.

Are you wearing something that is a gift from someone else or to yourself?

The gold ring that my husband gave to me that says in Breton “da vi ken” which means “For Life.” And I usually wear a pinky ring that my daughter helped get for me in Chicago. I usually wear something that reminds me of my daughter and that’s one of the things. I didn’t wear it today because I wear gloves [to paint] and I didn’t want to rip off the glove and lose the ring.

Do you have something that was a gift to yourself?

The shoes, usually the shoes. And the glasses, I buy glasses instead of jewelry. My jacket. It’s black, cropped with nice pockets. It is from a designer in California that I like to support, she designs for people like me. Stylish but not skinny.

What is it like painting in this popular area of the Carnegie International?

It reminds me of my stint as a street artist in New Orleans, for five years in Jackson Square. I was peddling portraits, quick portraits for tourists. It is very similar to that because you’re doing your work and you’re concentrating but you have to keep an antenna to the public. You have to engage with them, tell them what you’re doing, how and what the possibilities are. Interacting with the public has been a real scream. [Laughs] Who knew it would be so popular?

I knew we would have to talk what we’re doing, explain that “Yes we are artists, we are hired to do this.” The funny thing is when people grab a blank piece of paper and say “Okay it’s my turn now.” Or when there are people lined up and almost fist fighting over a particular title because it has some meaning for them. Or when people grab a piece off the wall [where they are on display and drying] without permission. Now it is clear you have to take a painting from the bin.

Are there ever paintings left in the bin?

Not since we started. [Laughs] Maybe in the morning we can find one or two in the bin or Wednesday morning. Then the line starts. People are coming back, often. One woman took five at a time. We almost called security. She said she was doing her Christmas shopping.

Mostly it is people who are really engaged, excited and it’s delightful and meaningful - it’s my favorite part of the International. But I am a little biased. The whole International is really up there.

What’s next for you?

I am doing a mosaic in a school in Paris, with the children. Then I will take a group of artists to Oaxaca in Mexico for Dia de los Muertos (Day of Dead) in Oct.-Nov.

Q and A with Image Consultant Sonia McKoy