CLO Cabaret's You Say Tomato, I Say Shut Up!

This longish one-act gets all of its sparkle and cheer from the performers. 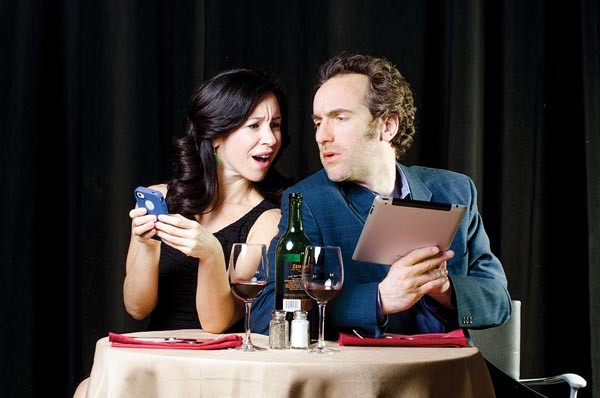 Photo courtesy of Archie Carpenter
Robin Abramson and Gregory Johnstone in You Say Tomato, I Say Shut Up!, at CLO Cabaret.

YOU SAY TOMATO, I SAY SHUT UP!

I don't know what the Pittsburgh CLO Cabaret is paying Robin Abramson and Gregory Johnstone for appearing in You Say Tomato, I Say Shut Up!, but this dynamic duo is worth twice the price.

Sure, Van Kaplan's facile and fleet direction helps, as does Tony Ferrieri's lovely set. But this longish one-act, in which married couple Annabelle Gurwitch and Jeff Kahn re-enact the high- (and low-) lights of their relationship, gets all of its sparkle and cheer from the performers.

Through the script, written by Annabelle Gurwitch and Jeff Kahn — about, one presumes, their own marriage — will never set the world ablaze, they certainly can string together enough witty sentences to keep things hopping for 95 intermissionless minutes. But there's something going on you might not notice beneath the dazzle of Abramson and Johnstone.

Annabelle and Jerry (the characters, not the writers) are perfectly insufferable. She is a relentless control freak who never forgets and only barely manages to trick her husband into thinking she forgives. Not that he cares, since, as he points out, the organizing principal of his relationship is a desire to get laid. There's even a hint that he's starting to look elsewhere, but it's not clear she's bothered because she wrote him off years ago.

Annabelle and Jeff (the playwrights, not the characters) have created a world right out of In Style magazine, with all the requisite talismans of middlebrow culture: iPads, Napa Valley, Kate Spade baby bags, the Coasts, shiraz (and its correct pronunciation), espresso, Facebook ... if only the character of Jeff were allergic to gluten rather than lactose-intolerant, it would be a home run.

But, again, you might not notice any of that because Abramson and Johnstone (with Kaplan's guidance) are so damned adorable with their 1,000-watt smiles and nuclear-powered appeal that you can't not love them.

I have no doubt that if these two ever play the Macbeths, you'll leave the theater thinking: "Why's everyone so down on them ... they seem like such a funsy couple."

Annabelle and Jeff (the characters and the writers) had better be grateful.