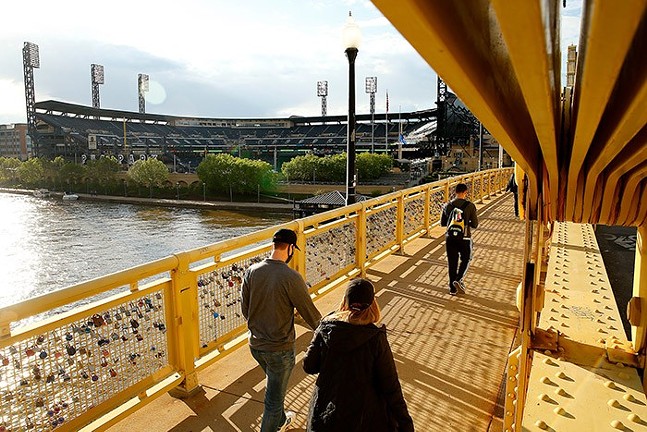 CP photo: Jared Wickerham
Pittsburgh Pirates fans walk across the Roberto Clemente Bridge on way to PNC Park
Whether a baseball fan or not, it’s a Pittsburgh tradition to walk on the Roberto Clemente Bridge on route to PNC Park. Many Pittsburgh Pirates fans even park in Downtown to enjoy a car-free walk across the bridge, which blocks off vehicle traffic during many home games.

However, that scenic stroll is going to pause for about two Pirates seasons as the Clemente Bridge is undergoing a reconstruction project that will last roughly 19 months. Despite losing their walkway for a couple seasons, Pirates officials are supportive of the project.

The Clemente Bridge is the last of three “sister bridges” (which include the Andy Warhol Bridge, Rachel Carson Bridge, and the Clemente Bridge) to receive reconstruction. The $30 million project is planned to begin in the winter of 2022, according to Allegheny County officials, with an estimated reopening date in the fall of 2023. This means the Clemente Bridge will be closed for the better part of two MLB seasons, taking away a bit of Pittsburgh game day tradition.

“There is no better showcase of our city both locally and nationally than the view from PNC Park,” Pirates spokesperson Brian Warecki told the Pittsburgh Post-Gazette. “A refurbished Clemente Bridge as a focal point will only enhance the way Pittsburgh is showcased on a nightly basis.”

Although the reconstruction stretches into two Pirates seasons, the Pittsburgh baseball team is in full support of the rehabilitation despite the inconvenience for fans who tend to walk across the iconic bridge. During this time, the Pirates recommend taking Pittsburgh’s light rail, aka the T line, to the North Shore or walking across the Warhol Bridge just a block down the road on game days.

The Department of Public Works, with additional funding from the Federal Highway Administration and PennDOT, launched the Sister Bridges Project to rehabilitate the three sister bridges that connect Downtown to the North Shore. The multi-million dollar project launched in 2016 with reconstruction of the Warhol Bridge and is estimated to end around fall of 2023 with the reopening of the Clemente Bridge.

The rehabilitation of the Clemente Bridge will include new utility lines that run beneath the bridge along with sidewalk replacements, construction of new stairs on the Downtown side that will lead to the Allegheny River bank, and underwater work to protect the piers from erosion, according to the Post-Gazette. Crews also have to remove the hundreds of locks that people have attached to the bridge, so that the bridge can receive a new paint job. Removing the locks will take a significant amount of time, say public works officials. The reconstruction will also include widening the bridge’s bike lanes to 5 feet.

According to the Allegheny County website, officials will begin taking public input about the reconstruction of the Clemente Bridge beginning July 7. The website provides a project overview, a video presentation, and an online form for submission of any questions or concerns regarding the project.

Allegheny County director of Public Works Stephen Shanley said the sister bridges should be in great condition for about 40 or 50 years once the reconstruction is finished, but will need maintenance retouches every 10 years, according to the Post-Gazette.