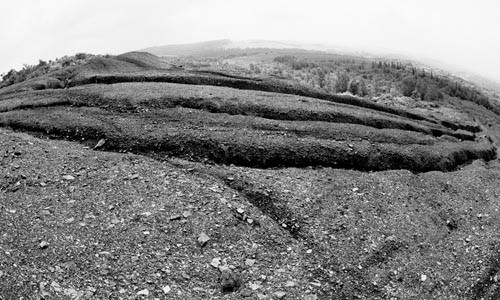 Heather Mull
Despite losing the battle five years ago, some Washington County residents still hope to keep the Robinson gob pile from becoming a power plant.

Five years ago, a group of Robinson Township residents tried to stop a waste-coal power plant from being approved. The Beech Hollow site, administered by Robinson Coal, would burn up a huge, festering old pile of "gob" -- the waste material left over from burning coal.

The gob pile has been an eyesore for years, but citizens worried that burning it would release mercury and other pollutants into the air. The plant got a necessary air-quality permit anyway -- but the story doesn't end there. The permit is set to expire before the plant is complete, giving opponents another chance to stop it.

On Aug. 27, a group of roughly 60 met at the Mount Lebanon Public Library to once again discuss tactics now that the fight has gone into overtime.

"There were major problems with the Beech Hollow air permits," said Lisa Graves-Marcucci, of the Environmental Integrity Project, a nonprofit that advocates for enforcement of environmental laws.

As first reported in City Paper in 2005, the permit was granted just days before far more stringent federal guidelines went into place. In light of plant owner Ray Bologna's close ties to state regulatory groups and legislators such as Sen. Barry Stout, it looked suspicious to some. Bologna sat on a board that disburses grants to environmentally friendly industrial projects and made campaign contributions to Stout, who advocated for the plant back in 2005.

But doubts over the permit are fast becoming moot. In April 2010, the permit will expire -- and the company acknowledges the facility won't be running by then.

"The owners have applied for an extension," says Joe Pezze, a consultant with Robinson Coal. "It's been in to the DEP for quite a long time" -- since the spring of 2008. Some work has been done on the site already, he says: The delays "are all related to the current economic situation. Obviously the process isn't moving as fast as a lot of people would like."

DEP permits are valid only for five years from the issue date, but extensions are sometimes granted -- typically when a project is set back by work strikes, weather disasters or other circumstances beyond the plant operator's control. Robinson Coal's application for an extension is "currently being reviewed," says Helen Humphreys, a DEP spokesperson.

One of the questions surrounding the plant is how up-to-date its equipment will be.

"Technology can change quickly and dramatically," Humphreys says. Extending a permit wouldn't necessarily require conforming to a whole new set of standards. But Humphreys says, "We don't intend to make a decision prematurely [if] a new technology impacting our decision could come out."

"The law is written to prevent someone bookmarking a site and building an antiquated [plant] 10 years down the line," says Graves-Marcucci. She calls Beech Hollow "a phantom project," contending that little has been done beyond some grading and paving of the pile's barren, moon-like surface.

Robinson Coal says burning the gob pile for the residual energy is a win-win: It creates power and gets rid of the pile. The company also says the Beech Hollow project will employ 700 skilled union workers during construction, and 90 full-time employees once it goes online. But many of those opposed to the plant say they object to it because it will pollute the land and harm them and their children.

Kyle Ferrar, of the University of Pittsburgh's Center for Healthy Environments and Communities, said at the library meeting that a gob pile is made of carbon-carbon bonds, which are burned to create energy. In the process, though, unhealthy minerals like arsenic and selenium can be released into the air.

"Breathing this particulate is negative for your respiratory health," Ferrar said. Once freed from the waste coal, the pollutants can "easily leach back into the air and water."

For now, the battle is legalistic. Robinson Coal must still get a mining permit, which requires a public hearing. The hearing is being scheduled and should be announced soon, says Humphreys. Plant opponents are urging citizens to attend that hearing in full force, and to write letters opposing an air-quality permit the facility also requires.

But in the longer term, "We just need to generally move beyond coal," said the Sierra Club's Randy Francisco at the Aug. 27 meeting. He acknowledges that something must be done with the pile, which has polluted nearby waterways for decades. But research by the Sierra Club and ECONorthwest, a public-policy think-tank in Eugene, Ore., suggests other options. The pile could be: left alone to eventually become inert; be reshaped and vegetated; or be moved to a lined landfill that seals pollutants inside.

Pezze says such objections are "typical of what's going on in the entire country concerning coal and other fossil fuels. The Sierra Club is opposing any new or waste coal. It's not a surprise."