Clayton Days Revisited is a nice idea — and a lost opportunity.

These images come off as precious and contrived. 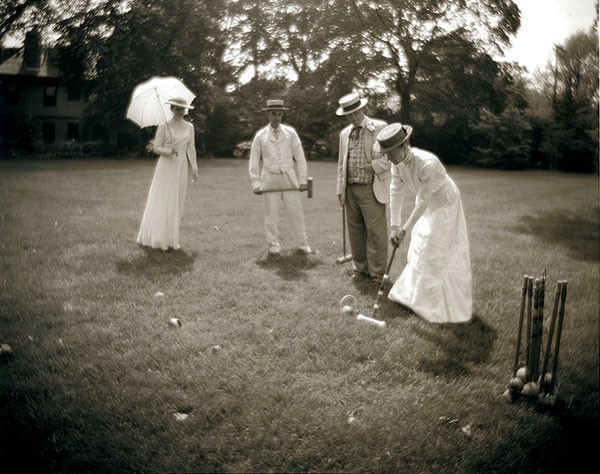 "Croquet I" (2000), a photograph by Vik Muniz. Image courtesy of the Frick Art & Historical Center.

Restored in 1990 and opened as a house museum, Clayton — the Henry Clay Frick family mansion — is an artifact of the Gilded Age. It is decorated almost entirely as the family left it in 1905.

In 2000, the neighboring Frick art museum exhibited Clayton Days, a series of photographs taken in the house, and in the environs of the Frick historic site. Artist Vik Muniz made the images during a residency that marked the institution's "first venture into working with a living artist."

In the 1990s, spurred by artist Fred Wilson's groundbreaking exhibition Mining the Museum, museums of every stripe began exploring ways to present their collections anew. Many invited contemporary artists to create projects that could offer insight and a new perspective. The Frick chose Muniz, widely recognized today for such politically charged projects as "Sugar Children" and "Pictures of Garbage."

At the Frick, Muniz chose to create a fictional late-19th-century narrative using contemporaneous photographic tools and techniques, including an 8-by-10-inch vintage camera, period lenses and orthochromatic film. Inhabiting the persona of a 19th-century photographer, Muniz cast Frick staff as characters in vignettes exploring daily life at the turn of the last century, as well as the history of art and photography.

The concept of Clayton Days is ultimately more interesting than the final product. The images come off as precious and contrived. The most interesting are actually the 14 that Muniz re-photographed from the Frick family photo albums, a method recalling artist Sherrie Levine, who gained recognition in 1980 by appropriating the photographs of Walker Evans.

Currently reinstalled as Clayton Days Revisited: A Project by Vik Muniz, the exhibition, organized by Sarah J. Hall, director of curatorial affairs, also includes 10 more recent works by the artist to put the project in a larger context. But Clayton Days doesn't really hold up. According to Hall, Muniz tried to capture the small things that are not presented in history books or on house tours. But Clayton is no run-of-the-mill 19th-century home. It belonged to Henry Clay Frick, an extraordinarily controversial figure in American history. To make only subtle reference to "workers" and instead focus primarily on period photography, allegorical imagery and esoteric art-historical references is a missed opportunity.