The theater is dark. A voice from the stage addresses the waiting audience.

So starts The Drowsy Chaperone at Pittsburgh CLO. The voice belongs to the protagonist, an unnamed character who appears in the script only as “Man in Chair.” The theater remains dark for a good two more minutes as we listen to our narrator, a serious devotee of the stage, share his frustration with the mediocrity of today’s musical theater.

It’s an ironic way to start a contemporary musical, made even more curious by the fact that our host is played here by 2003 American Idol runner-up Clay Aiken, a famous singer performing in a notably non-singing role. (Aiken was first slated to star in the Pittsburgh production in 2021 before the CLO was forced to cancel its original season line-up.)

When the lights come up on Man in Chair’s apartment, he’s settling into a night at home in his oversized beige cardigan, feeling “a bit blue,” and seeking an escape from reality. Our host turns to one of his favorite records (“yes, records.”), introducing Drowsy’s show-within-the-show of the same name, “Gable and Stein’s The Drowsy Chaperone, remember?,” a 1928 musical romp full of “mixups, mayhem, and a gay wedding.” 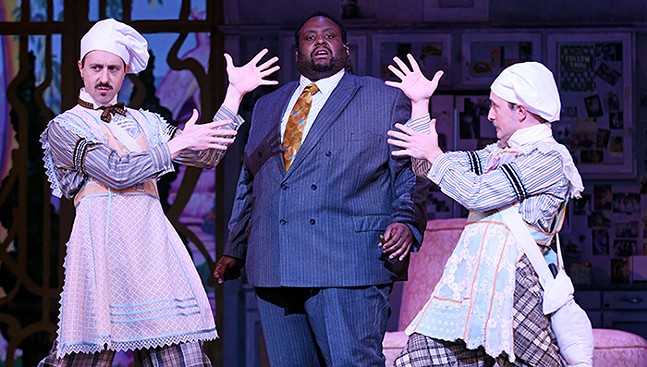 “Of course, that phrase has a different meaning now,” Aiken, who came out as gay in 2008, jokes, “but back then it just meant fun. And that’s just what this show is, fun.” He puts on the record and literally brings the show to life inside his bland but spacious apartment, with actors emerging from the fridge and luxurious Murphy beds folding down from the walls, among other clever ways J. Branson’s set moves the story to several different spaces including the sky above Rio de Janeiro without leaving Man in Chair’s studio apartment.

Starting off as the friend who is so excited for you to see their favorite show that they can hardly stop watching you watch it, it gradually becomes clear that Aiken’s character’s delight as the show unfolds in his apartment is actually the best part. His frequent interjections provide background on the cast of fictional Vaudeville and Hollywood stars playing the show’s characters and trace his character’s engagement with the show and its themes over time. He takes a fairly straightforward plot with flat characters and embellishes it with details that contextualize and critique the performances they frame.

Actually, The Drowsy Chaperone is not a forgotten relic of the Broadway boom of the late 1920s, but a Canadian musical from the late 1990s with a 21st-century sensibility written by songwriting partners Lisa Lambert and Greg Morrison as a wedding present to their friends Bob Martin and Janet van der Graaf. (Bob Martin went on to join the project and originated the role of Man in Chair in the show’s 2006 Broadway run.)

The Drowsy Chaperone, the play-within-the-play, focuses on the impending nuptials of Robert Martin (Ashley Day), a handsome son of an oil tycoon, and Janet van der Graaf (Katie Mariko Murray), a former celebrity showgirl who is preparing to “give up a life of glamor to tie the knot.”

Robert and Janet are surrounded by a cast of quirky stock characters with their own agendas including Janet’s boss, Feldzieg (Major Attaway) who needs to stop the wedding if he’s going to keep Janet as his leading lady, Janet’s titular chaperone (Paige Davis) who wants to get drunk and get laid, and Aldolpho (Chris Hoch), a bombastic Spaniard who Feldzieg pays to seduce the bride.

CLO’s production also features the legendary Donna McKechnie as Mrs. Tottendale, the rich, goofy, forgetful woman throwing the wedding. McKechnie is best known for her Tony Award-winning performance in the original cast of A Chorus Line, and although her role here doesn’t give her much to work with, I was still excited to see her perform live.

The production design rises to meet Man in Chair’s demand for an enthralling escape into the Roaring Twenties. The characters’ opulent dresses and dressing gowns, designed by the show’s original Broadway costumer Gregg Barnes with Isabel Rubio, pop against the neutral color palette of Man in Chair’s apartment. There’s still plenty of visual interest in the show’s neutral coloring, however, with chaotically clashing earth-toned patterns for two gangsters pretending to be pastry chefs, who are played with first-rate precision by brothers Parker and Blakely Slaybaugh.

A lighthearted, wittily self-referential script by Bob Martin and Don McKellar ties together catchy and emotive songs to structure a 100-minute reprieve from “this dismal little world in which we live,” as the Chaperone herself puts it.