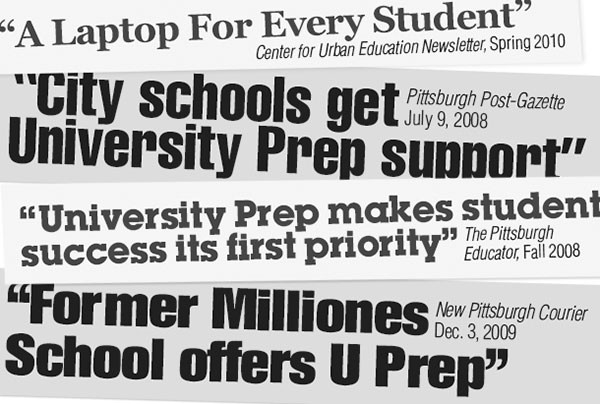 When Pittsburgh's Milliones 6-12 school building opened in 2008, classrooms were named after prominent universities, and the halls were hung with college banners from schools like Notre Dame, Howard, Temple and Duke.

The decor reflected the Hill District school's status as a "university preparatory" program, specially designed to send city kids on to higher education. And it was just one sign of the district's high hopes for the program, housed in the former Herron Hill School building after a $15 million renovation.

There was the promise of laptops — one for every high school student to take home — and school uniforms in khaki, blue and white. The school pledged to provide college tours. And there was a much-buzzed-about partnership with the University of Pittsburgh, which would provide academic expertise to teachers and grad-student assistants in classrooms. Such ties, the district pledged, would make the school "a national center for excellence in public education and a model for school district/university partnerships."

Then-superintendent Mark Roosevelt called the school — which quickly became known as "UPrep" — a centerpiece for education reform. "It's about transformational success," he said in an interview with public-TV station WQED after the school opened.

The college banners still hang in the halls, but few students who pass beneath them are eligible for the district's college-scholarship program. UPrep ranks among Pittsburgh's lowest-performing schools on standardized tests, and the school has struggled with disciplinary problems.

"It's a nice show, but all you have to do is look closely," says Damon Randolph, whose son transferred to UPrep last year.

UPrep is in the midst of yet another new initiative — a student-leadership program focused on discipline. Two years into that effort, says UPrep Principal Derrick Hardy, "We are seeing the most significant growth we have experienced."

But even if that trend proves sustainable, UPrep offers difficult lessons about education reform at a time when, in Pittsburgh and other urban districts, such reforms are proposed at a dizzying pace. Big-dollar grants can pay for new initiatives, but won't necessarily sustain them. Diminished resources and labor disputes can undermine innovations. And some challenges in urban schooling might lie far outside the classroom.

"The promise that they had made, for it to be a university-preparatory school, was undermined from the very beginning," says Sala Udin, chair of the Hill District Education Council. "The promise has never been kept to this day."

'He said people would come from around the country'

UPrep was born out of the 2008 closing of Schenley High School and a district-wide "right-sizing" plan to adjust to a dwindling student population by closing schools. Roosevelt's adjustments included combining middle schools with high schools, creating "6-12s" at UPrep and two other buildings. This configuration, officials hoped, would provide continuity in education from middle school to high school, giving educators a chance to help troubled students before ninth grade, by which time research suggests it's often too late to help.

"In order to get community acquiescence to right-sizing, the promise was made to the Hill District that they would get a special high school," says Udin, a former city councilor whose group gives the community a voice in neighborhood education. "That was the deal."

UPrep was modeled after programs like YES Prep in Houston, Texas, and Lionel Wilson College Preparatory Academy in Oakland, Calif. Such schools feature smaller student populations, longer school days and school years, and partnerships with area universities. Those reforms have improved outcomes for low-income students, who are among the least likely to graduate from college.

Education reform, Roosevelt told WQED in 2008, "implies something systemic, not just tinkering around the edges. It implies improving systems in the long-term interest of children's better education."

Meanwhile, Roosevelt hoped UPrep's success would dovetail with another high-profile innovation: the Pittsburgh Promise scholarship program, which grants city students $40,000 for post-secondary education if they meet attendance standards and have a GPA of at least 2.5.

"Roosevelt said he wanted to focus on the underachieving students," says Annette Werner, an education advocate who opposed the closing of Schenley. "He said people would come from around the country to see University Prep."

Roosevelt, who is now president of Ohio's Antioch College, did not respond to multiple requests for comment.

There were plenty of people willing to help pay for the experiment. Some UPrep innovations were paid for with a five-year, $1.2 million federal grant. The Heinz Endowments offered a $500,000 grant to purchase new laptops in partnership with the University of Pittsburgh, as part of a "digital village" initiative to increase access to education through technology.

Yet despite those innovations, "I think you'd be hard-pressed to find anyone who thinks it lived up to the original vision," says Carey Harris, executive director of A+ Schools, a local education watchdog organization.

As of 2013, only 23 percent of UPrep students were eligible for the Pittsburgh Promise, compared to the 53 percent average for students in the district's 6-12 schools.

Statewide Keystone exams, which test 11th-graders on the knowledge they should have before graduation, show a similar trend. Students at UPrep are less likely to score proficient or better than are 11th-graders at all other high schools except Westinghouse High School and Perry High School. UPrep students also trailed similar city schools on the Pennsylvania system of school Assessment Tests for the 2012-13 school year.

"I'm not saying there aren't high-achieving kids there, because there definitely are, but clearly as a school it hasn't lived up to what we had all hoped," Harris says. "I think it's a reflection of just not having everything they wanted in place."

"There were a lot of positive innovations planned for that school," says former veteran school-board director Jean Fink. "I guess those all got forgotten."

"There was inertia in the system that did not allow the school to be the innovative space we thought it would be," says Derrick Lopez, who designed UPrep as the district's former assistant superintendent for school reform. The school's "incredible innovations ... were supposed to be a part of the work that went on day in and day out, and it just did not happen."

'There was no commitment to fund that'

From the outset, the district's math never really added up.

UPrep was supposed to include extended hours, but the recommendation was never enacted. The original principal, Sito Narcisse, left after one year. When current UPrep principal Hardy replaced him, Hardy says, he sought to extend UPrep's school day by 45 minutes. But that would cost $2,100 per teacher annually, and the district couldn't afford it.

"There was no commitment to fund that," Hardy says. (District spokesperson Ebony Pugh couldn't say why the original recommendation was scrapped.)

Roosevelt left Pittsburgh in 2010, two years after UPrep opened its doors. And almost from the moment current superintendent Linda Lane took over, Udin says, "The school district was facing a financial crisis and just did not have the money to put in to keeping [Roosevelt's] promise." The district predicts it will run out of money in 2016, in part because of a $27 million drop in state funding under Gov. Tom Corbett. The initial $1.2 million federal grant to support UPrep has also expired.