"It's like the rug was pulled from underneath us." 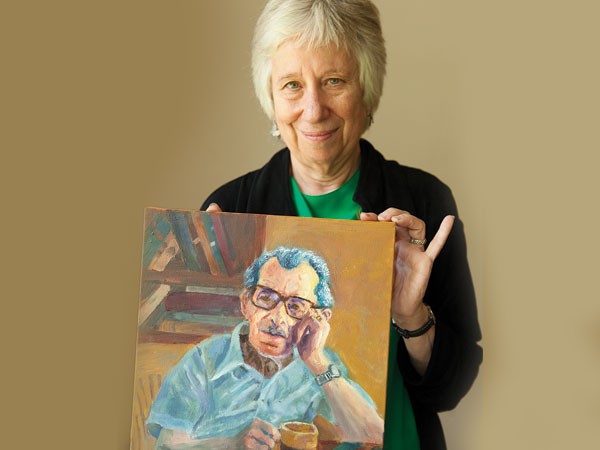 Photo by Heather Mull
Carol Zisowitz, among the students protesting the Carnegie's cancelation of adult studio-arts classes, poses with one of her paintings

"Join a class act," read the web page touting the Carnegie Museum of Art's adult studio-arts program. "Let us become your art studio. ... A draw-what-you-see class in the middle of the great Hall of Architecture. A portraitures class. Or a study in watercolors. Our studio classes have something for everyone."

The page, since deleted, was still available on July 9 — about the time the museum told instructors and students that, after August, it was ending its venerable program of semester-long studio classes for adults. (The museum's popular children's classes are unaffected.)

The museum says the move reflects a new philosophy about how best to educate the public about art. But students and instructors — some of whom have been taking or teaching the classes for years — were quick to express their anger and sense of betrayal.

"It's like the rug was pulled from underneath us," says Janet Jourdan, who recently took a Creating With Clay class at the museum. "We thought we were going back to class [in the fall]."

"It really is a great loss," says Joan Gordon, a longtime volunteer docent at the museum who recently studied watercolors there. "An art museum without classes is diminished in its significance to the community."

Adult studio classes at the Carnegie in their current form date to the late 1940s. By 1975, according to research by writer David Berger (an occasional CP contributor who volunteers with the Carnegie's program), some 3,700 students were enrolled. Over the decades, classes have covered not just painting, sculpture and pottery, but everything from modern dance and interior decorating to metalworking, jewelry-making, fly-tying and taxidermy.

Such offerings were gradually pared back. Last year, the program served 422 adult students, including repeat enrollees, in its five- to 10-week classes, says Marilyn Russell, who heads the museum's education department.

Still, the classes, which typically cost museum members $75 to $100, were "always very full," says Carol Zisowitz, a Squirrel Hill psychiatrist who's taken painting classes for the past eight years. "Usually people can't get into them." Comparable classes at the Pittsburgh Center for the Arts cost at least twice as much. Moreover, Zisowitz adds, "On the whole, I think it's more prominent artists who are teaching at the museum." Carnegie instructors include Robert Bowden, who has works in the museum's own permanent collection.

Of her fellow students Zisowitz says, "We're serious artists. We belong to galleries. We sell our work."

The benefits to art appreciation even reached museum volunteers. "I feel [the classes] helped me a lot as a docent," says Gordon, an Oakland retiree who's volunteered at the museum for 25 years.

In April, the Carnegie moved art classes from a high-ceilinged, marble-columned basement room to a smaller space. The idea was to make room for office staff displaced from another, leased building. But the Carnegie said classes would continue in some form. It wasn't until July that Madelyn Roehrig, the part-time employee who's overseen adult classes for 21 years, was told she'd be out of a job at the end of August.

The Carnegie speaks well of the classes it has canceled. "[W]e know that those taking studio classes received excellent instruction from skilled instructors, and ... we care deeply about enrollees," museum director Lynn Zelevansky wrote in a July 18 blog post explaining the move.

However, she said, a task force of museum staffers had determined that for many would-be students, multi-week classes were too much of a commitment. Moreover, the classes left education-department staff little flexibility or energy for doing more inventive programming that might reach a wider public.

Museum spokesperson Jonathan Gaugler adds that the decision had nothing to do with space at the museum — "There's actually plenty of space down there" — or with budgetary concerns.

Couldn't the museum have hired more staffers, or raised fees, to continue the classes? Russell says the question misses the point: "It's really about broader vision." The Carnegie's mission, she says, is to enhance appreciation of the museum's artworks. "Perfecting someone's artistic vision may not be the best way to do that," she says. "Learning how to paint isn't as central to our mission and the opportunity to make sense of your world as [are] experiences with great works of art."

Instead, the museum plans to hold workshops based on individual temporary exhibits. Some workshops might be hands-on, but many could be lectures. The first scheduled is a week-long drawing workshop early next year with artist Nicole Eisenman, as part of the upcoming Carnegie International. Multi-week classes are a possibility, too, says Gaugler, "if it makes sense."

Defenders of traditional adult classes — some of whom have registered protests online and are circulating a petition to reinstate the program — don't buy such arguments. "I never heard anyone say, ‘Can't we do a one-day class?'" says Linda Wallen, a longtime painting and drawing instructor. Critics also say it's impossible to learn basic art skills in short-run workshops.

Asked about the museum's plan to hold workshops tied to specific exhibits, Robert Bowden, who's taught watercolors and drawing at the Carnegie for more than a decade, says, "I don't see why they can't do both. ... I think the faculty is there and the interest from the public is there."

Dropping the current roster of classes "eliminates the real local connection as far as the artists and teachers," Bowden adds.

Some critics suspect the Carnegie's talk of serving a "broad public" is code for "appeal to younger people." Many of the Carnegie's current students, after all, are retirees. But Wallen, for one, says half her students were under 30. Casey Droege, who's taught drawing at the Carnegie as recently as 2011, says the program "was bringing in younger folks already and I think they could have built on the program instead of breaking it down."

A Carnegie without regularly scheduled adult studio classes might be somewhat unusual among large urban museums. The Cincinnati Art Museum, for instance, offers monthly sketching and crafting workshops, and even the financially troubled Detroit Institute of the Arts offers one-day workshops in various media.

Yet art museums with multi-week versions of such classes year-round, as the Carnegie had till now, also appear exceptional. The Baltimore Museum of Art, for instance, has an "interactive gallery" that only sometimes includes hands-on activities. Even New York's mighty Metropolitan Museum of Art offers only informal, twice-monthly "Drop-in Drawing" sessions in the galleries, and other workshops running one to three days each, more or less monthly.

Some museums that run multi-week classes are either also accredited art schools — like the Art Institute of Chicago — or institutions rather larger than the Carnegie.

One big museum with a large adult program is the Cleveland Museum of Art, which last year served 3,100 enrollees.

"Art appreciation is our goal, and education is in our mission, and one way people learn is by doing," says that museum's director of intergenerational learning, Seema Rao. "To get this appreciation might be about honing their own skills."

"We really value the art-making process," says Karen Satzman, who leads adult studio programs at the Los Angeles County Museum of Art. Students, for instance, can learn the finer points of the "hand" of a great artist by studying the museum's works, she says. "What better way to get your mind into it than by having that experience [of making art] yourself?"

"When you start taking a class at the museum, you are making so many connections to the museum" and its artworks, Satzman adds.

Satzman says that while 10-week classes have limited appeal, the museum's five-week courses are popular: "It's a commitment for students but not too much of a commitment." LACMA also holds one-day, exhibit-specific workshops of the type the Carnegie now favors.

Rao acknowledges that many museums don't offer multi-week classes because "[i]t takes a lot of work." On the other hand, she says, "We're really lucky, because people really like them."