“I think there’s an assumption in classical music, that if something is good, it will be known. … Question those assumptions.” 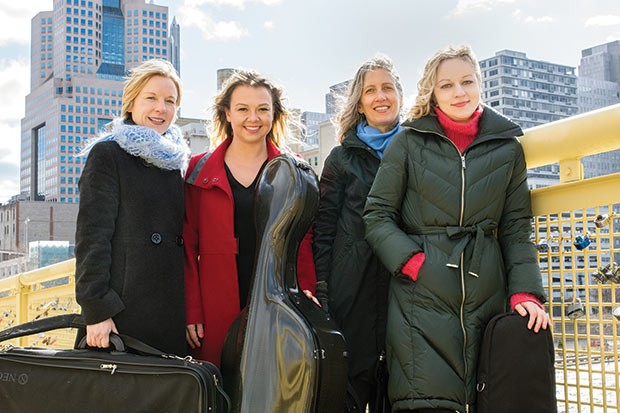 Theresienstadt looked like a normal Czech village when the Red Cross visited it for inspection in June 1944. There was a bank, a bakery and children singing and performing. But beneath the surface, a sinister truth lurked.

Theresienstadt was a transitional concentration camp used by the Nazis during World War II. Many artists lived there, and in this strange set up, there was some freedom to create. Composers and musicians wrote and collaborated in spite of the awful conditions.

It was the Red Cross visit, however, that made the prisoners realize the camp’s leniency wasn’t permanent, nor was their time there.

“But they still continued to create, that’s what is so amazing to us,” says Clarion Quartet violist Tatjana Mead Chamis.

According to the United States Holocaust Memorial Museum, 90,000 Jews from Theresienstadt were deported further east, certainly to die, and about 33,000 perished within the camp itself.

Although the history of Theresienstadt, as a complicated creative hub in spite of the horrors of WWII, is fairly well known, the music that was created there is less so.

That is the mission of the Clarion Quartet: to perform the music stifled by Nazi Germany and bring it to the fore. This includes work by Erwin Schulhoff, Viktor Ullmann and and Erich Wolfgang Korngold. On Breaking the Silence, the quartet’s first release, the musicians take on 11 incredibly challenging pieces by these three composers.

“I think there’s an assumption in classical music, and probably elsewhere, that if something is good, it will be known. And that’s what I’ve really taken the most out of this project is to question those assumptions. It’s not the case,” says Clarion Quartet cellist Bronwyn Banerdt.

“The suppression has come all the way to this century, and it continues,” adds Chamis. “So, it’s really our duty as musicians, we feel, to bring it out. If we’re not playing it, who is going to know about it?”

All four members of the Clarion Quartet are full-time employees of the Pittsburgh Symphony Orchestra. The group began working in January 2017, getting together to rehearse in whatever spare time could be carved out around PSO rehearsals.

“We were brand new to each other, and it was kind of shocking that we wanted to rehearse so much. And we were moonlighting!” says violinist Jennifer Orchard.

A major moment for the group was its performance, during the PSO’s European tour, of pieces from Theresienstadt. That meant that during an extremely busy work tour, the quartet was rushing to pull instruments out of cargo and practice during any free moment, filling breakfast rooms in hotels with the brilliant sounds of Ullmann, Korngold and Schulhoff.

The Theresienstadt performance was filmed by a German videographer who was deeply moved by it, and told the quartet that he and his brother wanted to record its music. The quartet members were flattered, but could not foresee it becoming reality: The funds did not exist; the women were full time at the PSO; and the two German men were literally across the ocean.

But the brothers later received a grant, which they used to travel to the United States for two-and-a-half days of intense recording. This work would become the recently released Breaking the Silence.

For the Clarion Quartet, the work doesn’t stop at performing and releasing albums. Outreach to music schools is another area in which the women invest energy and time. The Quartet will be closing out a university-wide weekend later in March at the University of Utah in which each school — those of music, art, architecture, literature and beyond — will be examining how Nazi suppression changed what culture we consume today.

The Quartet is grateful that audience members and others are beginning to catch on to the mission as well.

“Things are working out for this project because they have to. There’s something about great art — it just has to be heard,” says Chamis. “We’re all part of this, and [the audience] has the same mindframe that they want to do something about the social injustice of [the musical repression], and cultural injustice. It spans over all the arts, because all of culture had the same repression.”

“It’s not just the people who were in the camps who were affected by all of this, and that’s what I want us to understand as humans,” says Banerdt. “Every time we disenfranchise other humans, all of society suffers.”