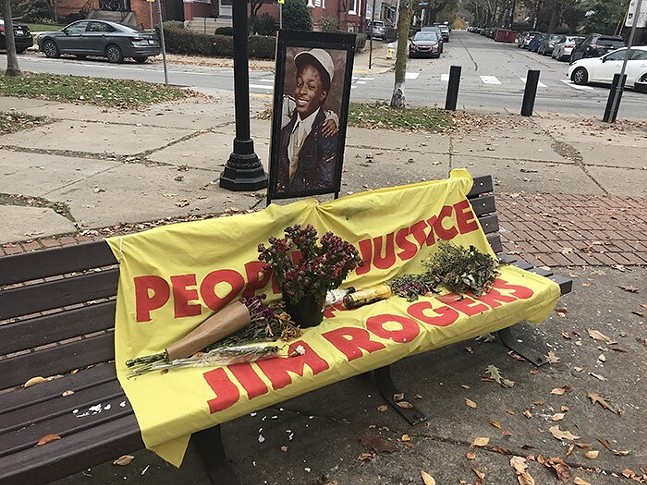 CP Photo: Ryan Deto
A memorial to Jim Rogers on a bench in Friendship Park in Bloomfield
Mayor Ed Gainey and Public Safety Director Lee Schmidt have announced the conclusion of the internal investigation into the death of Jim Rogers, a Black man who died in October 2021 less than 24 hours after Pittsburgh Police officers tased him eight times. The city announced on March 23 that it plans to terminate five of the eight officers involved in Rogers’ death. Three officers will remain in their roles.

On Oct. 13, 2021, a Bloomfield resident called the police to report Rogers allegedly stealing, then returning, a bike from a neighbor’s front yard. The police tased Rogers eight times after arriving at the scene. Rogers reportedly asked for help and medical attention at least 13 times as he was sitting in the back of a Pittsburgh Police vehicle after he was tased. He was transported to a hospital, but “exhibited a medical emergency” outside the hospital and died the next day.

“First and foremost, my heart and my prayers go out to the Rogers family, their friends, and the entire city,” Gainey said at the March 23 press conference.

Gainey responded to criticism that the city took too long to announce the outcome of the investigation into Rogers’ death, saying investigators worked “as thoroughly and efficiently as they can without jeopardizing this case.”


Gainey called for continued work to improve police-community relations in the city, adding, “The death of Jim Rogers is a stark reminder of the work we have in front of us to make our city the safest city in America.”


Both Schmidt and Gainey declined to name the five officers who were terminated.

“We welcome the decision by Mayor Gainey’s office to fire five of the Pittsburgh police officers ... involved in the killing and violation of civil rights of Jim Rogers,” writes the Alliance for Police Accountability in a statement on the announcement. “Never in the history of Pittsburgh have we seen this level of accountability when it comes to police misconduct, abuse of power, or state sanctioned violence. This first step in the process of accountability is necessary to change police culture and to regain the trust of the public.”