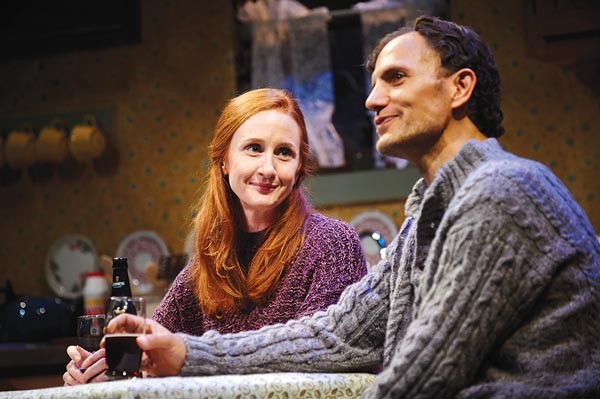 The Irish can be irritating or endearing — often simultaneously — as John Patrick Shanley demonstrates in his recent Broadway hit Outside Mullingar, now at City Theatre. The one-act moseys through five years of life, death and love in the Irish countryside. But mostly love.

City Theatre artistic director Tracy Brigden has a way with bittersweet romance. That's not the way Mullingar is billed, but can it possibly be a spoiler to admit that, yes, the long-unrequited love of the heroine is finally returned by the most un-alert male in all of Ireland? And Brigden, also not surprisingly, deftly lets the characters speak and unfold in a most pleasant theatrical exercise for the audience.

Shanley, who is American, says he was inspired by his Irish forebears and contemporary relatives, whom he has visited. (The family farm is indeed outside a village near the town of Mullingar, in County Westmeath.) The production's program notes the story of the playwright's visit to his Shanley grandparents' grave with his cousin Anthony, the name he gives to the father-son characters.

The cast is small but well chosen. Noble Shropshire (surely one of the greatest names in theater today) portrays the cranky but worried patriarch who loves the land and his family — and even his son, whom he threatens to disinherit. But Shropshire's finest moments are his character's telling of his love for his late wife. Mary Rawson is perfect as the too-briefly-seen Aoife Muldoon, a new widow looking forward to her own death with morbid relish. (Always well served on Irish dishes.)

But it's their grown children, hardworking neighboring farmers, who are at the heart of the tale. Rosemary Muldoon wears hers on her sleeve, but the amazingly obtuse Anthony Reilly can't see it. No, what he sees are "signs" in anything amiss that love is not for him. Megan Byrne and Ron Menzel make this odd courtship credible as they imbue their characters with spirit and charm (a not-so-easy feat for Anthony).

There's plenty of wit and humor, and perhaps a bit of wisdom, in Outside Mullingar, a romance for grown-ups.