City Theatre’s Nomad Hotel a lesson in children raising themselves 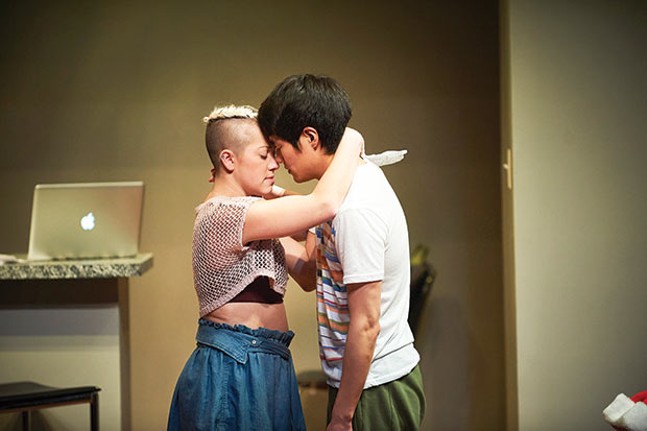 Ripped from today’s headlines! (I always wanted to start a review like that …)

The first are working poor families that, because of rising house prices and stagnated wages, are forced to live in motels. The latter are children from foreign parts (mostly Pacific Rim countries) sent to America, alone, by their parents; they’re enrolled in a high school as the first step in ensuring their acceptance at a first-class university.

In a “you got peanut butter in my chocolate” moment, Ching wondered what would happen if such young people became friends. Nomad Motel, now receiving its local premiere at City Theatre, is her answer.

Alix is a high schooler whose mother has made some bad relationship and financial choices. Her two brothers and mom are making barely enough to live in a motel, and, not surprisingly, Alix’s schoolwork has crashed through the floor, along with her dream of attending college.

Mason (he’s been assigned to work on a school project with Alix) is alone in a suburban house. His father lives in Hong Kong working for what would appear to be the Asian mafia, but still takes time, via phone, to relentlessly push Mason on academic achievement and hammer the absolute necessity of getting into Harvard’s School of Business.

For various reasons, Alix’s mother and Mason’s father suddenly disappear. These two kids, even more than before, are forced to grow up and begin to chart their own lives away from such toxic adults.

As bleak as this all sounds, Ching soft pedals most of the desperation and danger; catastrophe seems always to be lapping at the shore, but Ching never lets it get any further up the dramatic beach. This isn’t exactly a “feel good” play, but she obviously cares too much about these characters to actually jeopardize them.

Bart DeLorenzo takes a similar light touch approach with his direction, emphasizing the pluckiness of Alix and the endearing resolution of Mason.

Katie Lynn Esswein and Christopher Larkin do a terrific job showing us the enormous emotional cost of children forced to raise themselves and, most exceptionally, they avoid the trap of self-pity, the temptation of which would have sunk lesser actors.