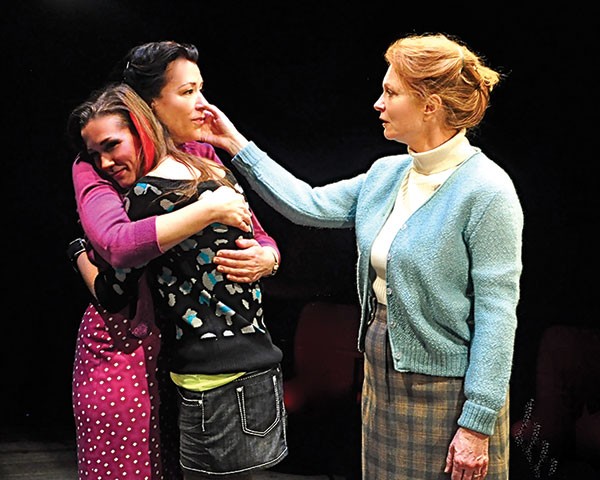 Somewhere in the middle of Elaine Murphy's Little Gem — now at City Theatre — I was startled to realize that, in a lifetime as a professional audience member, this was the first play I'd ever seen by an Irish woman. I'm not sure what, if anything, that means. But after several thousand evenings lost in innumerable theaters, it's a remarkable factoid.

Little Gem is three interwoven monologues from members of the same Dublin family: grandmother Kay, mother Lorraine and daughter Amber. Over the course of the story, they will see some old relationships transform and new ones begin.

The danger of plays written as monologues is that, with all that recollecting of past events, they can feel removed and already resolved. But Murphy cleverly has the women discovering the events as they're happening: All the verbs are in the present tense. It may seem like a small thing, but it helps tremendously.

There is a streak of easy sentimentality running through Murphy's writing, especially in the second act. But judging from the audience, my reaction might be based more on my own bitchiness than Murphy's talents.

Director Kimberly Senior nearly trips herself up before the show even starts. The quaintness of the Lucky Charms pre-show music coupled with Jack Magaw's frowsy, antiques-store-like set suggests an entirely different play than the one about to begin. But once Senior gets underway, she proves incapable of further missteps. Little Gem is a sincere, unadorned tale, and Senior gets authentic and moving performances from her cast.

Cary Anne Spear's turn as the grandmother is as entertaining as it is because Spear makes us understand that Kay has no idea how funny she can be. Hayley Nielsen plays Amber as a frightened young girl whose false bravado (bravada?) leads her into a too-adult situation.

The role of Lorraine, it must be said, is like something you'd see in an Oprah network TV movie. But after Robin Walsh gets done electrifying it with so much emotionally shattering life, you'd swear you're watching a documentary.

When all's said and done, Little Gem is a highly engaging opportunity to hear women narrating their own lives.