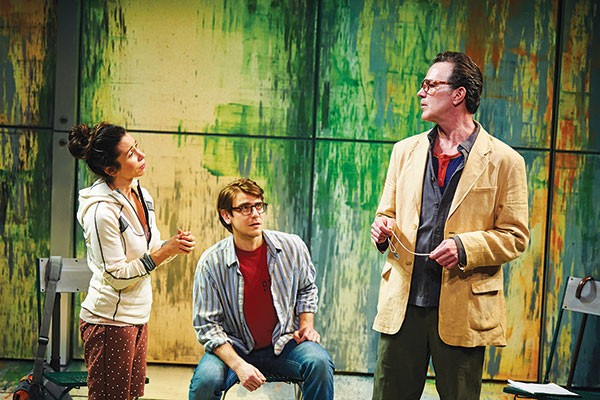 I'm not sure how people who've never tried writing a play might feel, but Michael Hollinger's Hope and Gravity, receiving its world premiere at City Theatre, is a lovely piece of playwriting.

Hollinger imagines a group of people moving through life never understanding how connected they are to the stranger standing beside them. He writes nine scenes which seem self-contained but prove otherwise. For example: A school secretary in one scene turns out to be a pick-up by a dentist in another who, in another, rides an elevator with two grad students, the professor of whom, in another scene, shares a conversation with a woman who is the wife of the boss of the school secretary.

The "message" might not be the freshest thing ever to come down the theatrical pike, but Hollinger continually surprises with the sly connections and, most notably, the tightrope he walks.

This could have been a frightfully precious script, but Hollinger provides the exact note of melancholy to keep it grounded. He balances frequent, and unabashedly, poetic language with shameless low humor and seasons the whole enterprise with intelligence, compassion and just good old-fashioned quality playwriting. He never allows the reveals to become the story, by which I mean the mystery of how each person is connected isn't made the climax of each scene.

I could wish the actual stories being told were a little less ... familiar. But while Hollinger is breaking no ground with the lives of his characters or their troubles, how he tells their tale is wonderful.

Tracy Brigden's direction is a sinewy silhouette of Hollinger's writing: She follows him down every dramaturgical street but can still stretch and bend the outline of the production to enlarge the image he's meaning to project.

Watching this top-notch cast is particularly rewarding, especially comparing and contrasting how they attack the couple of roles each plays. They are also completely in tune with Hollinger's style: Robin Abramson, John Feltch, Rebecca Harris, Daniel Krell and Federico Rodriguez give fiercely intelligent yet understated performances, ultimately enticing us to come live in Hollinger's absorbing world for a while.