Playwright Aguirre-Sacasa reimagines The Crucible's Abigail Williams as a misunderstood waif with a horrible childhood. 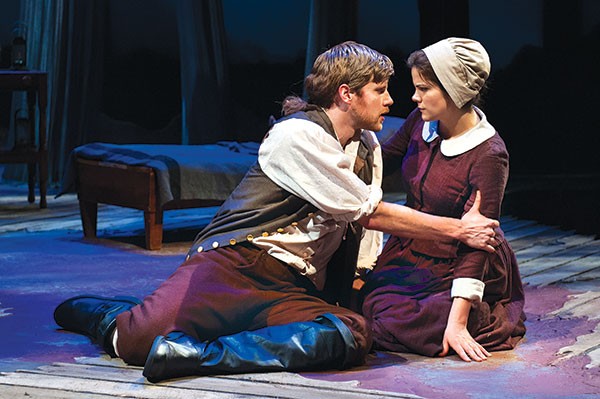 When we left Abigail Williams, near the end of Arthur Miller's The Crucible, she had just vanished after bringing Salem to its knees with accusations of witchcraft. In his new play, Abigail/1702 (now at City Theatre), Roberto Aguirre-Sacasa attempts to answer the question: "Where'd she go next?"

The first choice a playwright must make is which Abby to follow: Miller's dramatic creation or the real Abigail upon whom she was based. Aguirre-Sacasa' picks Miller's version ... and that's where the trouble starts.

In this play, Abigail has moved into the woods outside of Boston and becomes a medicine woman. Into her cabin stumbles John Brown, a man with his own past and a galloping case of the pox. She eventually cures him and, heterosexuals being as they are, the two fall in love.

Aguirre-Sacasa's intent might be to beatify Abigail; certainly we are meant to forgive her her trespasses and, indeed, come to admire her.

Miller (inventing freely) wrote Abigail as one of the most loathsome, evil, power-crazed villains of the American Theater; watching her hideous manipulations in The Crucible is a breathtaking experience. But here, she turns up as a misunderstood waif with a horrible childhood. If Aguirre-Sacasa wants to rehabilitate her, he should go back to the actual Abby, who was an 11-year-old girl and not the lascivious, treacherous 17-year-old murderer Miller made up.

There's something else: Miller turned the Salem witch trials into a scalding cry against political fascism. Aguirre-Sacasa looks at the same event and comes up with a simpering melodrama about lonely people falling in love. And, too, the otherworldly lengths he needs to go for the happy ending Americans crave irked me as well.

Thanks to an amazing set of designers — Tony Ferrieri, Pei-Chi Su, Andrew David Ostrowski and Eric Shimelonis — director Tracy Bridgen puts on one hell of a show. There's a lot of down time in the script, but Bridgen and company supply endless diversion.

Diane Davis plays Abigail, and I only wish her incredible commitment and power had been used in a better play. John Feltch impresses with a surprise character at the climax, and Deirdre Madigan's intense underplaying offers plenty of reward.