2 Pianos is a testament to the backbreaking work needed just to be "merely good." 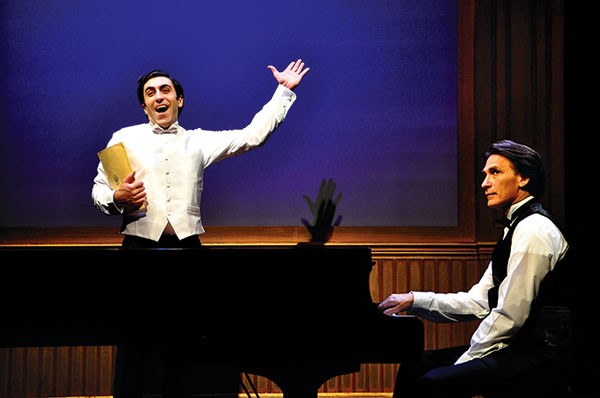 It was a great "you got peanut butter in my chocolate" moment in Toronto back in the mid-'90s when actors/musicians/writers Ted Dykstra and Richard Greenblatt met while working on a theater project and found their childhoods had been remarkably similar. Both were piano prodigies who had sacrificed a "normal" adolescence to intense practicing and competition.

Revisiting and reworking these memories, Dykstra and Greenblatt created 2 Pianos 4 Hands, which the two men performed around the world for more than five years. It's easy to understand why this is the most frequently performed Canadian play ever written. It's a smooth and swift evening, entertaining when it can be (which is most of the time), with enough of an edge to keep it from curdling.

And more than any show I've ever seen, 2 Pianos is a testament to the backbreaking work needed just to be "merely good." These young men discover that it's years and years of crushing, relentless discipline ... with no guarantee on the other end.

I suspect that if the show's talent requirements weren't so specific, 2 Pianos 4 Hands might be the most performed play in the world. You need two strong actors who don't play pianists ... they actually need to be pianists. So let's give a big hand to City Theatre and director Tom Frey for bringing together Bob Stillman and Christopher Tocco for this Pittsburgh premiere of 2 Hands.

Much of the show is each actor playing a young boy being tormented by an extravagantly crazy piano teacher; Stillman and Tocco have no difficulty slipping in and out of all these roles with a deft comedic touch. When the play turns serious in the second act, each actor plays shattering heartbreak with a haunting stillness. And Frey does incredible work blending all the emotional beats seamlessly, allowing the production to be inflated with joy or bruised with sorrow as needed.

And sometimes the 2 Pianos trappings disappear and Stillman and Tocco simply unfurl their extraordinary musical gifts in brief, or long, recital — including, and especially, the first movement of Bach's "Concerto in D Minor." It's a mesmerizing end to a terrific evening.