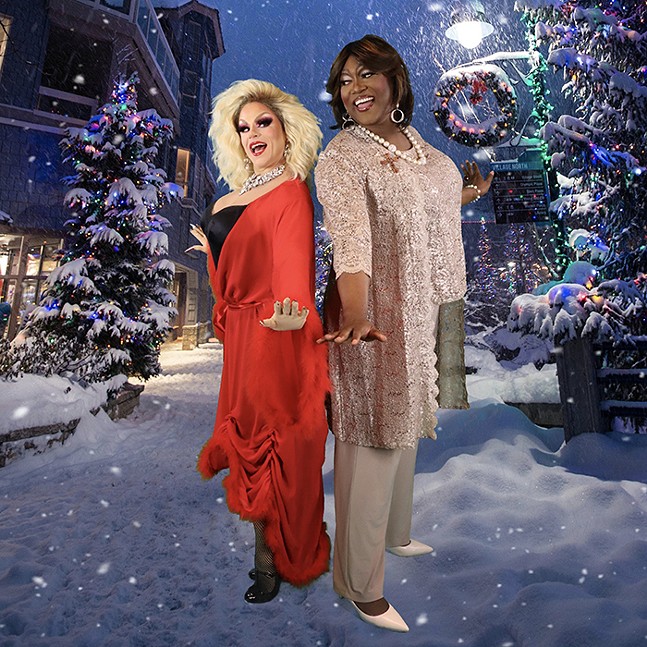 Photo: Greg Messmer/Shua Potter
Shua Potter and Monteze Freeland in Claws Out: A Holiday Drag Musical
The holidays are all about peace and togetherness, showing family and friends how much you appreciate them by exchanging tidings of good will and, of course, gifts. But City Theatre will give audiences a different kind of gift this December when it debuts Claws Out, an original drag holiday musical starring Shua Potter and Monteze Freeland as women fighting for the title of Mrs. Claus.

“These two women [are] just going after each other. It's kind of like Golden Girls on steroids,” says Potter, who plays Rachel Claus, a “Mrs. Claus-type character” who is Jewish and from Long Island, New York.

Claws Out, which Potter describes as a bawdy bit of “camp comedy hilarity,” means more than just bringing holiday joy to theatergoers missing live shows during the pandemic. It also marks the first film produced by City Theatre. The pre-recorded stage production, which was shot in front of a green screen, will stream online from Fri., Dec. 4 through Jan. 10, 2021.

Potter says City Theatre artistic director Marc Masterson encouraged him to expand on what was a one-man piece he wrote and performed as part of the theater's 2019 adaptation of author David Sedaris' The Santaland Diaries. But some changes needed to be made, which is where Claws Out co-star and co-director Freeland came in.

“[Masterson] said, '[Rachel] needs a foil, she needs someone up there with her,'” says Freeland, who directed Potter in The Santaland Diaries and serves as an associate director at City Theatre.

So Freeland created Roberta, a former school principal from Winston-Salem, N.C. who was inspired by female comedy greats like Jenifer Lewis and Carol Burnett.

“She's pretty staunch, she likes to rule, she's about order — she doesn't like to play around,” says Freeland. “Whereas Rachel is a ball of fun.”

From there, composer Douglas Levine was brought in to write original musical numbers for the work.

Potter and Freeland admit that while they are seasoned professionals, they and the rest of their crew had no experience doing film, especially one that required a lot of post-production.

The film was shot over the course of a week, primarily at the WQED studios in Oakland. Potter and Freeland performed in front of a 40-by-20 foot green screen, with the floor also painted green to ensure they had plenty of space with which to work. 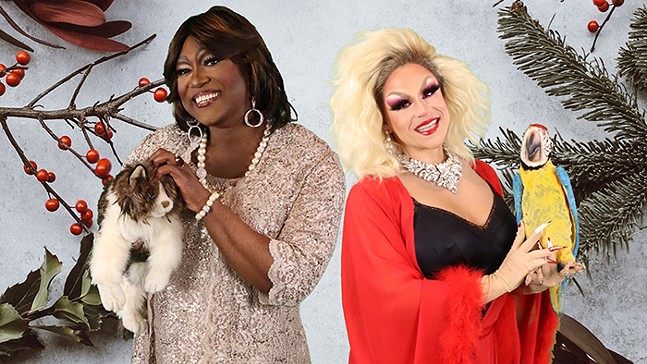 Photo: Greg Messmer/Shua Potter
Monteze Freeland and Shua Potter in Claws Out: A Holiday Drag Musical
Without an audience to react to their antics, Potter and Freeland had to rely on each other and their crew to get the material to shine.

“I miss the audience because they are so integral to a new play process,” says Freeland, explaining that, typically, they will have some kind of crowd to play to before a new show opens. “We need to hear what works.”

Still, Freeland says he saw it as an opportunity for him and everyone involved with the show to challenge themselves.

“You really have to rely on your instincts and feel yourself a little bit,” says Freeland.

He describes how members of the limited crew also had to take on tasks outside of their expertise.

“We needed 20 more people,” says Freeland. “So to see people take on roles they've never done before, it allowed their imagination and creativity to thrive. And it was so wonderful to see a group of people who are professional at what they do become a novice, and allow themselves to gain an education so they become professionals in a new way. It's so inspiring to watch that.”

He also credits the theater company for being able to produce a light-hearted show in the face of a pandemic, and the social and political upheaval in what has been a turbulent election year. This is in addition to City Theatre implementing anti-racist efforts in response to the theater industry's reckoning with discrimination in the community at large.

With that in mind, the creators want Claws Out to serve as an escape from the stress of this year by providing what Freeland calls “good laughs, hummable tunes, and some drag.”

Photo: Greg Messmer/Shua Potter
Monteze Freeland and Shua Potter in Claws Out: A Holiday Drag Musical
Still, the show is not your typical family-friendly holiday entertainment — Potter rates it as PG-13, though Freeland disagrees.

He says audiences should expect a mix of racy humor, course language, and Broadway numbers. “There are fart jokes, there is stuff you'd see on The Simpsons and Family Guy,” he adds. “It's for people who just want to sit and have a silly time.”

Potter and Freeland will also host interactive Zoom events to complement the show. For $50, guests who live within a certain radius can order a personally delivered box of treats and crafts, and join the stars for a virtual holiday party before and during the film.

More than anything, Potter says he wants audiences to have as much fun watching Claws Out as he had making it.

“[Freeland] was so easy to work with, we just laughed the whole time writing this show,” says Potter. “So I really hope we bring a lot of smiles to people this Christmas.”