“I think there’s a culture of drinking in college no matter where you go.” 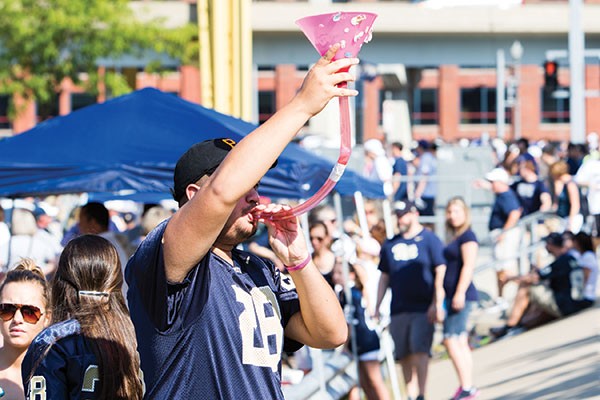 First there was Animal House, the 1978 film comedy following a group of college fraternity members. It’s the movie that made toga parties popular and made college synonymous with drinking.

But Animal House was only the beginning. What followed were a slew of alcohol-infused party movies, including American Pie (1999) and Superbad (2007) — coming-of-age films that follow graduating high school students poised to enter a world of hedonistic exploits.

“We’re in the American Pie era,” says Antonio Blundo, a University of Pittsburgh senior. “All these movies have come out that constantly portray college as a place to drink. It’s what the mainstream media really pushes college as.”

A recent study found that college students are more likely to drink than are 18- to 22-year-olds who aren’t in college. The study, released this past summer by the U.S. Substance Abuse and Mental Health Services Administration, used data from a federal survey of about 10,000 young adults.

According to the Centers for Disease Control and Prevention, binge-drinking is “a pattern of drinking that brings a person’s blood alcohol concentration (BAC) to 0.08 grams percent or above.” (That’s about five drinks in two hours for men, and four drinks for women.) The makers of the AlcoMate Revo digital personal breathalyzer recently offered Pittsburgh City Paper one of their devices to test and use. (We’re not experts in administering breathalyzer tests.) For this story, we interviewed local college students to find out why they think their classmates are more likely to drink than are peers who are not matriculating. After each interview, we administered an unofficial BAC test. (We also talked to some students who weren’t intoxicated.)

Based on our anecdotal evidence, the spirit of college drinking appears alive and well, and the usual “just say no” approach isn’t hitting home for many. In an effort to protect students, several Pittsburgh-area colleges and universities are developing new and engaging education programs to make the alcohol-abuse discussion livelier.

“I don’t think it’s helpful to just tell people to just say no to alcohol,” says Blundo, who spoke to CP by phone and was not breathalyzed. “I think it’s OK to stop lying to ourselves. I think it’s OK to say realistically, ‘I’m going to drink tonight.’ I think people should learn to do it responsibly.”

At 10 p.m. on Sept. 9, the night before the big Pitt-Penn State football game, we found ourselves at Peter’s Pub, the popular Oakland watering hole. The bar was crowded and noisy, and the floor was sticky and strewn with popcorn.

Breathalyzer in hand, this reporter spoke to students and recent grads about why they think college students are more prone to binge-drinking than their peers. While all were willing to take the test to see if they were above or below the legal limit of .08, few were willing to provide their full names.

“We’re reckless,” said Dan K. (whose BAC was .41 — and yes, that’s five times the binge-drinking level). “I think social media has a big effect because we’re trying to live up to the standards we see. I go onto Instagram and I see pictures about being this fucked up and this fucked up. We’re looking for acceptance. Everyone wants to be like the next person. It’s like trying to bring movies and TV shows to life. It’s all bullshit.”

“I think there’s a culture of drinking in college no matter where you go,” said Carlos Sierra (BAC .32) “Nine times out of 10 you make friends that want to drink.”

“If you’re in college, everyone drinks,” said Michael K. (BAC .37). “There’s more stress because of doing school work. College is the best time of your life and you’re supposed to do that. I drank before college. Everyone basically did.”

“They taught us unrealistic stuff like have one drink every hour,” said Peter O’Donnell (BAC .15). “If I gave you a drink, how long would it really take you?”

“To be honest, I don’t think I’ve gotten that much education about drinking,” said Sierra. “I was taught you go to college to study, but you also drink. It’s part of college.”

While those interviewed said alcohol education programs didn’t really influence them, they said getting caught for underage drinking can be a real wake-up call. Cole Z. (BAC .16) who turned 21 last week, said that if you get caught drinking underage, you have to take a class, and it ends up costing $1,000 for the ticket and other fines.

“A lot of people turn 21 in college and they’re like, ‘I’m finally going to do it.’ But even before that, the younger kids see it and they say, ‘I want to do it too,’” Cole Z. said. “Plus it’s a stereotype because of the media. College has always been like this because the media stereotypes it.”

But once you graduate, the party’s over, say recent college graduates. “I have more things to do now, more responsibility,” said Nina S. (BAC .07), who graduated this past spring.

Lisa P. (BAC .01), another recent grad, said binge-drinking derives from peer pressure. “It’s just like there’s nothing else to do. Everyone is doing it. We’re so stressed. It’s just a release.”

Despite the current climate, there are several barriers to alcohol abuse from the time a freshman sets foot on a local college campus or university. Firstly, most of Pittsburgh’s universities have dry campuses.

“Carlow University is a dry campus,” Drew Wilson, director of media relations for Carlow, wrote in an email to CP. “Students and their guests are not to have drugs or alcohol on their person or in the residence hall. Students found in violation of this policy will face immediate disciplinary action from the university, as well as possible sanctions consistent with any federal, state or local laws for a drug or alcohol violation.”

And at Carlow, first-year students are required to complete the My Student Body alcohol-awareness survey online before they arrive on campus. The survey gives college administrators data to target, evaluate and strengthen prevention initiatives related to drug and alcohol abuse and sexual violence.