“To see McCutchen traded away for essentially a bucket of batting-practice balls and a Gatorade cooler is a real problem for me.”

Javé Brown works for a local nonprofit and is also the special-teams coach for North Hills High School.

Harvey Mazel is a sales representative for WTAE-TV and, despite growing up in Rochester, N.Y., he has been a Pirates fan since 1970. Mazel took a job with 3WS radio in 1987, specifically to be in the same town as the Pirates.

Ben Wolford works locally in transportation and is a lifelong Pirates fan. He says proof of his fandom is the fact that he counts Pokey Reese among his favorite Pirates of all time.

Benjamin Cantor works locally in finance and, while he is a fan (he frequently can be found arguing Pirates baseball on three different message boards), he says he’s not a “homer.” 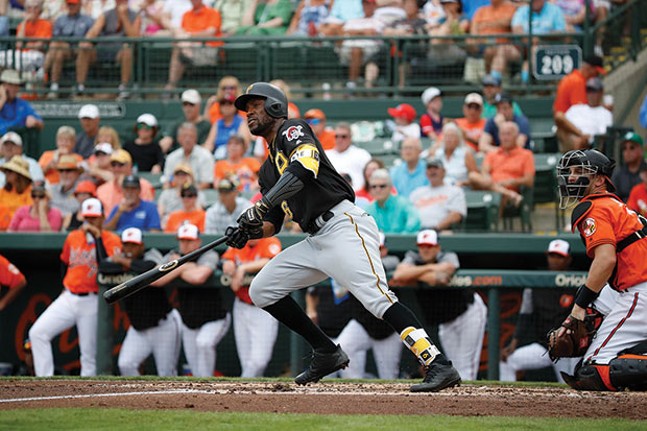 This past Major League Baseball offseason, it’s been hard to be affiliated with the Pittsburgh Pirates, whether as a player or a fan. Andrew McCutchen and Gerrit Cole were shipped out of town. General Manager Neal Huntington and owner Bob Nutting have been on the hot seat. During the offseason, we’ve heard from players and Pirates management about the state of the team.

But, for our annual Pirates Preview, we wanted to find out what the fans were thinking and what they were expecting heading into the 2018 season. We rounded up five Pirates superfans to get their takes on the state of the Buccos.

City Paper: It’s been a busy offseason for the Pittsburgh Pirates but not in a good way, with the trades of Gerrit Cole and Andrew McCutchen. What’s your mindset going into the season with moves made by GM Neal Huntington and owner Bob Nutting?

Javé Brown: Harvey and I were already talking about this. I can understand from a business perspective why they pushed McCutchen out. But McCutchen was a great guy to have in the clubhouse. He was a great face for the franchise. When Neil Walker was traded, this team and this city leaned on Andrew McCutchen. Who are we going to lean on now? J-Hay [Josh Harrison]? I don’t know.

Harvey Mazel: Every decade or so in baseball a guy comes along who becomes the face of the franchise — Derek Jeter for the Yankees, Yadier Molina for the Cardinals. For the Pirates way back, Willie Stargell was that face. He was the leader of those teams. And while McCutchen didn’t always say a whole lot, he was able to convey that he was this team’s leader. He put the team, in fact the whole franchise on his back, and he has carried them. He was a great spokesman for the team, the city and the region. So, I feel like trading McCutchen wasn’t just a baseball move. They traded away the fabric of this team. He had a year left on his contract, and they traded him away for nothing.

Ben Wolford: As a team who’s in a financial situation like the Pirates, you really have to get a lot of talent back when you trade a player like McCutchen or you’re setting yourself back …

JB: Right, and that’s why they were in the situation they were in for 20 years, because of bad deals like this.

BW: Yeah, but it didn’t help that McCutchen wasn’t at peak value the past two seasons.

HM: You’re right, he wasn’t at peak value, but he signed a very team-friendly contract, and he did perform over-value. I think they should have let him play out his final year, and if a deal couldn’t get done, let him go. But this wasn’t the way to do it. They essentially abandoned him.

BW: Nobody wanted to see McCutchen leave, but this is the culture of Major League Baseball. There are six or seven other teams that operate the same way the Pirates do.

Jody DiPerna: Cutch is a guy who is larger than his stat sheet. He’s larger than his OPS and his slugging percentage. He is a Willie Stargell-type player. I feel lucky that I got to see two of those guys play for this team in my lifetime. And to see McCutchen traded away for essentially a bucket of batting-practice balls and a Gatorade cooler is a real problem for me. For a franchise that has a PR problem, like they do with three winning seasons in a quarter of a century, it wasn’t a great move.

JB: Right, they care so much about money, but they gave away their money-maker.

HM: I think McCutchen’s presence is equivalent to filling 5,000 seats per game.

JD: I do too. They’re going to have a real attendance problem this year.

JB: They’ve had an attendance problem the past three years.

HM: They have, but I think this is going to be unlike anything they’ve seen in quite a while.

JD: Neal Huntington hasn’t had a good run in the past six months. It started when he put Juan Nicasio on unrestricted waivers. That may be one of the stupidest moves that anyone has made in a long time.

HM: I think his run started even earlier than that. Last year, the Pirates made a wild-card run that nobody expected, and it seemed like the front office didn’t want them to succeed. When Gregory Polanco went down, Jay Bruce was sitting out there, a viable outfielder with a good bat, and nobody moved on him. We could have had him for a song.

JD: I’ve been a Huntington fan, but it’s been a disastrous eight months for him.

JB: The bottom line is, he doesn’t make decisions that cater to getting fans in the seats. He’s all about … actually, I don’t know what he’s all about. Because if it’s not about winning a World Series or boosting attendance or getting fans to buy merchandise, what is driving his decisions?

HM: He won’t acquire players, and he won’t commit to a complete rebuild. He likes to play both sides of the fence.

BW: He’s thinking, ‘Yes, we want to win a World Series this year, but we also want to be OK next year too.’

JD: I’ve got to be honest, I’d put all my chips on the table for a World Series win now and then be bad for 20 more years. I want that World Series.

HM: You can do that, but that’s never a guarantee that you’ll succeed.

JD: True, but you’ve got to try at some point. Look at the Brewers last year. They were better than anyone thought they’d be, and they went out and got Christian Yelich. If I was a Brewers fan, I’d be super-psyched about this year.

BW: They still don’t have pitching.

JD: Yeah, but they’ve got excitement.