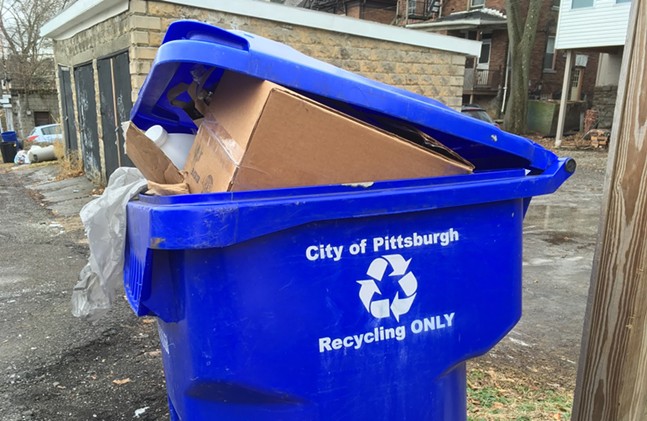 Today, the City of Pittsburgh announced that it received a $500,000 grant offer from the Recycling Partnership, a national nonprofit organization that leverages corporate partner funding to improve recycling in communities across America. The funding is part of an agreement to match the city’s 2020 Capital Budget proposal for a three-year program to purchase and deploy recycling containers city-wide.

The plan would benefit the 115,630 Pittsburgh residences who have their waste and recycling collected by the Bureau of Environmental Services.

As stated in a press release, the agreement to increase the number of free, re-useable blue bins would help eliminate the need for the blue garbage bags residents often use to pack their plastic, metal, glass, paper, and cardboard recycling. As reported by the Pittsburgh Post-Gazette and WESA, the bags have been shown to impede the recycling process, including clogging the machinery at the Material Recovery Facility run by Recycle Source in Hazelwood.

It will also expand on the Pennsylvania Resources Council’s initiative that has provided Pittsburgh residents with over 10,000 blue bins and recycling information since 2015.

The agreement comes several months after Peduto announced a years-long plan to provide thousands more blue recycling bins to city residents. It was touted as potentially helping the city meet its zero waste goals by decreasing waste sent to landfills and easing the sorting process for recycling workers. It could also save residents money as they participate in the city’s mandatory recycling program, as blue bags cost as much or more as regular garbage bags.

“As the recycling industry and our climate continue to change, Pittsburgh needs to keep adapting to a stronger culture of waste reduction and material reuse,” Peduto said in a press release. “A strategic plan for purchasing and deploying blue recycling bins citywide will make that culture change more accessible, equitable and meaningful for all.”

The bins are another way the city is working to encourage residents to participate in Pittsburgh's mandatory recycling program, which has been around in various forms since 1991. Besides curbside recycling, residents have access to drop-off centers throughout Pittsburgh and Allegheny County, and an interactive online map was recently launched to help people search for both private and municipally run recycling services.

Bin distribution has not been finalized, but residents can sign up for updates on the program at the City of Pittsburgh website, by contacting 311, or by calling 412-255-2621.