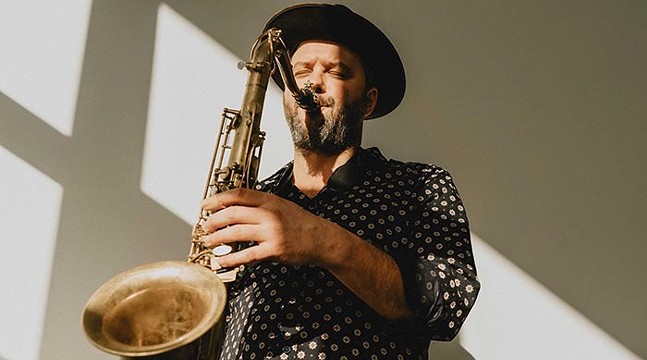 Photo: Aljoša Videtič
Jure Pukl, part of Jazz Poetry Month 2021
The popular Pittsburgh event, Jazz Poetry Month, will return in mid-September to once again bring together international poets, writers, and musicians for a celebration of experimental art and music.

And this year, organizer City of Asylum will blend online platforms with in-person performances so that audiences from all over the world can participate in this one-of-a-kind event.

Some of the nine concerts will be entirely virtual, some will be live-streamed from jazz clubs located throughout the world directly to Pittsburgh, and some will happen live through City of Asylum's programming arm, Alphabet City. Regardless of their location, all programs will be streamed and can be watched at any time through the venue's Crowdcast page.

"At its core, Jazz Poetry is about the exchange of music, language, and ideas," says Franco in a press release. "This year, we feature musicians and poets from seven countries, including artists with long and deep connections to City of Asylum and artists new to Pittsburgh. We look forward to welcoming back in-person audiences to Alphabet City and to connecting with artists and concertgoers around the world via our online programming."

The event kicks off Sun., Sept. 12 with Layale Chaker, a Lebanese violinist and composer who blends classical, jazz, and Arabic music. She will perform her debut album Inner Rhyme which explores the various facets of Arabic poetry.

The next performance in the series will be by the Norihide Nakajima Quintet, a group of musicians from Japan. This performance was pre-recorded at Rag Jazz, a top jazz club in Kyoto, and will be streamed.

According to a press release, the Quintet marks the first time Jazz Poetry Month has reached Japan.

Following the Japanese quintet will be the Vlatko Stefanovski Trio, described as an ethno-rock-jazz fusion trio from North Macedonia.

According to Khoi's website, Bad Activist explores her rise to fame as a pop star in her home country before being labeled the "Vietnamese Lady Gaga" by the media for her "sexually charged antics." After becoming a political activist, she was placed under surveillance and banned from singing in public.

Also included is the Slow Motion Orchestra, a collective of jazz musicians from Estonia, City of Asylum residents Thumbscrew, and Jure Pukl from Slovenia, who first performed in Jazz Poetry 2019 as a part of the Impossible Four Quartet.

Jazz Poetry 2021 concludes with a performance by saxophonist and composer James Brandon Lewis, who will be joined by drummer Chad Taylor and poets M. Soledad Caballero and Joel Dias-Porter. Lewis will also join the Red Lily Quintet to perform songs from Jesup Wagon, an album they recorded together.

Audiences can also expect poetry by Peep Vain of Estonia and Jovica Ivanovski of Macedonia.

City of Asylum director of programs, Abby Lembersky, sums up the nine Jazz Poetry performances as allowing artists "to transcend differences in genre, style, and even language" and "to connect with audiences around the globe."

“Jazz Poetry demonstrates that bringing musicians and poets together to experiment, to collaborate, and to express themselves freely yields performances greater than the sum of their parts," says Lembersky.