"That weekly thing brought us the revelation that we really liked playing live together." 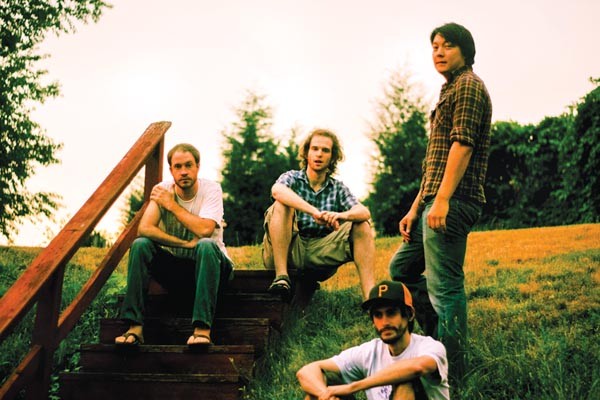 with THE BOOGIE HUSTLERS.

For Pitt students who happen to be in bands, there is a host of Oakland bars and clubs within walking distance of campus at which to gig — not to mention countless epic house parties thrown by undergrads who long ago gave up hope of recouping their security deposits. But the options are much slimmer for musically inclined kids at Duquesne University, who are stationed in the Bluff, a dusty, not-quite-revitalized patch of the city upwind of Downtown. This is how City Dwelling Nature Seekers, an alt-country quartet formed by four Duquesne music students, ended up with a weekly residency at a pizza joint.

"It was technically an open-mic night," says drummer Chris Parker. "But no one else really showed up" besides the occasional Duquesne classmate. When the band was between songs, the cooks at Milano Pizza on Fifth Avenue sometimes tasked them with calling out the take-out orders that were ready to go.

It was a modest gig (and the band was paid in beer and pizza), but their two years at Milano allowed the Nature Seekers to refine their sound, a mix of breezy harmonies and laidback folky riffs that show the influences of Ryan Adams, John Prine and The Band. And while the band members were mostly studying recording techniques at Duquesne, "that whole weekly thing brought us the revelation that we really liked playing live together," says bassist Matt Booth.

Since City Dwelling Nature Seekers formed in 2008, they've recorded two albums and an EP, with all songs written by singer/guitarist Michael McCormick (with some melodic input from Parker). The tunes are roots-inspired, with scenes of booming autumn colors and down-and-out characters bound for places like halfway houses, but McCormick stops short of storytelling. "It's never a narrative," he says. "It's very image-based and dreamlike. Sometimes I don't know how the words are connected."

Their latest, The Winter Years, steps up the nuevo-country sound, with guitarist Lee Hintenlang experimenting with the mandolin, and guest guitarist Peter Freeman adding the sound of a pedal steel. But don't let the rootsy influences lead you to think the album is a low-key, homespun affair. Recording at Red Caiman Media, a local studio, the Nature Seekers put their formal training in the recording arts to good use, creating a clean, layered sound throughout the record and seamlessly integrating a string section into a handful of songs.

Following a CD-release show at Thunderbird Cafe, the band is set for a tour that will circle through Tennessee, Kentucky, Ohio and Indiana — areas where they have never been but suspect their sound will be appreciated.

One club owner warned them he didn't have enough plastic letters to spell the band's full name on his marquee. As per that name, McCormick says he was "trying to describe the kind of people who would listen to us, and it also worked as a band name." Parker adds, "Since I started being in a band with that name, I've felt pressure to go outside more."