To celebrate the 100th anniversary of Negro League Baseball, the City-County Building will feature an exhibit beginning Feb. 3 and continuing through Feb. 28 that highlights the notable players, owners, and managers of both the Pittsburgh Crawfords and Homestead Grays through photos, artifacts, and memorabilia.

Pittsburgh was a hotbed of Negro League Baseball talent. The Grays are the only team in sport’s history to win nine consecutive league titles (1937 to 1945) and two World Championships. The 1935 Pittsburgh Crawfords — dubbed the “Yankees of the Negro Leagues” — are considered one of the greatest baseball teams of all time and the team featured five Hall-of-Famers with Josh Gibson, Oscar Charleston, Cool Papa Bell, Judy Johnson, and Satchel Paige.

And while the playing talent of these two teams is indisputable, so is the impact the teams had on the Pittsburgh community. Gus Greenlee, who owned the Pittsburgh Crawfords, put much of his money back into Pittsburgh, financing homes for Black residents who would indefinitely be denied by white banks. He is also responsible for building the first Black-owned major league baseball field in the United States — Greenlee field on Bedford Ave. between Chauncey and Duff in the Hill District.

Native of Homestead Cumberland Posey, who owned, played, and managed the Homestead Grays, wrote for the Pittsburgh Courier and was called the “smartest man in Negro baseball and certainly the most successful."


The exhibit helps viewers dig deeper into the history of Pittsburgh Negro League powerhouses and be transported to a time and place that is too often forgotten in local sports lore. It features photos taken by Teenie Harris (who also played for the Crawfords), reproductions of portraits by Graig Kreindler, and the continuous screening of the award-winning documentary Kings on the Hill: Baseball’s Forgotten Men by Dr. Rob Ruck of the University of Pittsburgh. 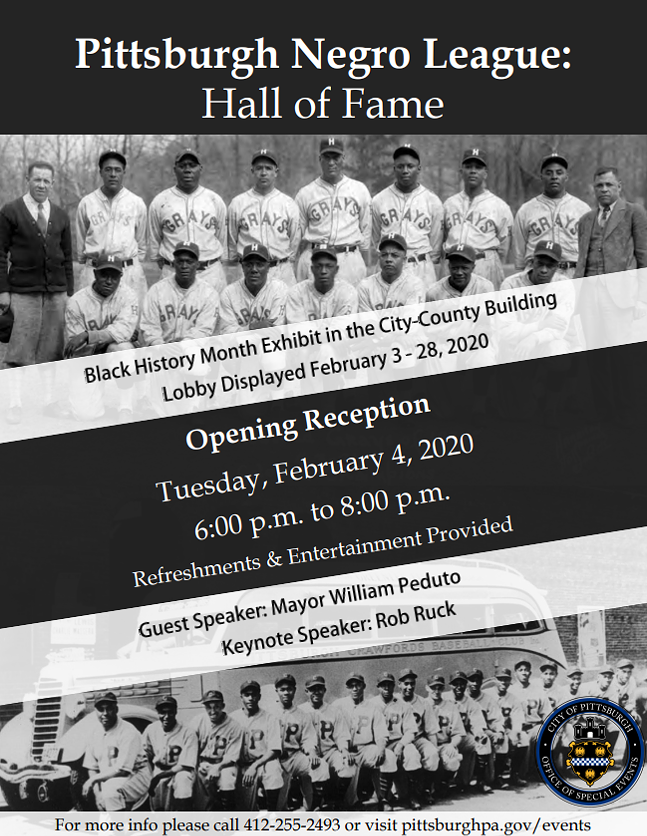 Attend the opening reception on Feb. 4 at 6 p.m., which will feature remarks by Mayor Bill Peduto, a keynote address by Ruck, entertainment by Michael Bernabe, and refreshments.