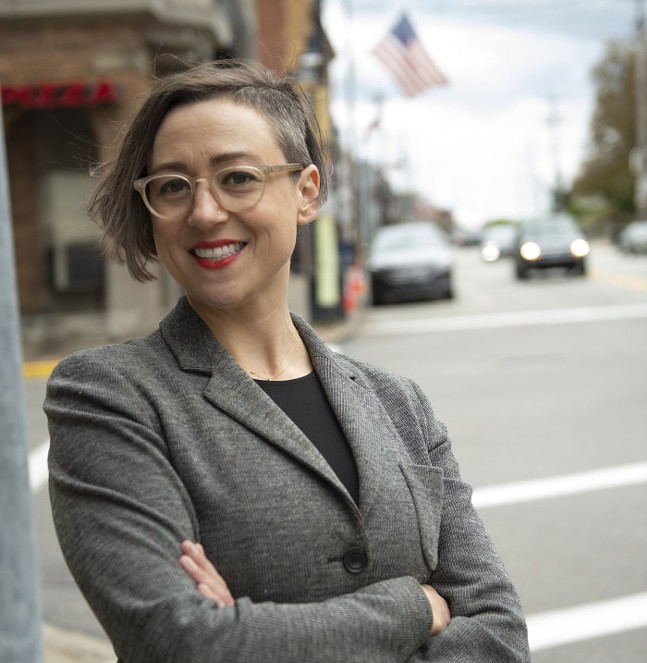 Photo: Caoilinn Ertel
City Council candidate Bethani Cameron
A month after Pennsylvania's statewide eviction moratorium ended in September 2020, hundreds of eviction complaints were filed across Allegheny County, even as the pandemic and its economic fallout raged on. Many of those eviction filings have continued, and even if they don’t result in a judge issuing an eviction, they can result in fees that tenants have to pay, even if federal rules are supposed to protect tenants.

Now, a Pittsburgh city council candidate is calling for more action from the city in largely stopping evictions from happening in the pandemic.

Last week, Bethani Cameron (D-Overbrook) tweeted out a video calling on Pittsburgh City Council to issue an eviction moratorium. She told Pittsburgh City Paper that stopping evictions now is paramount because renters are in between stimulus payments, there are still eviction hearings happening within the city, and families are facing an especially taxing environment without child care.

“This is a public health issue, and it apparently snows every day this winter now,” says Cameron. “You can’t even imagine a worse circumstance to be evicted during a pandemic during the winter.”

Today I am calling on Pittsburgh City Council to 🛑 STOP 🛑 evictions during the pandemic. You have the power to save lives and protect families like mine, please do. pic.twitter.com/HpQF20Th6c

“It is really simple stuff, all it is doing is adding an eviction moratorium to our emergency declaration,” says Cameron. “We are renewing this declaration every 30 days, anyway.”

Pittsburgh City Council President Theresa Kail-Smith says city council wants to do something to stop evictions during this time before stimulus funds arrive, but says council won’t be doing so through the city’s emergency declaration.

She says she talked to the city’s law department who said there are concerns over how the eviction ban would be enforced in the city if through an emergency declaration. Kail-Smith says the city is hoping to have a policy later to roll out this week that would work similarly to an eviction ban, using the city’s police department.

“I believe it would accomplish the same as an eviction moratorium,” says Kail-Smith. “Absolutely the council is supportive, if there is something that we can work together to stop evictions.”

Kail-Smith says she doesn’t want the council to provide people with “false hope” with a policy they can’t enforce. She says council didn’t act earlier on this matter because they were waiting on the answers from the city’s law department.

Cameron says she understands the limits city council has in terms of enforcement. But says amending the emergency declaration would provide renters some backing.

“City council doesn’t have a ton of enforcement power, but it at least puts something out there,” says Cameron. “It would provide renters to say, ‘The legislation says you can’t evict me.’”

Additionally, it’s unclear whether or not the city of Pittsburgh could follow Harrisburg’s lead.

The tenant’s rights group Pittsburgh Union of Regional Renters has been advocating for Pittsburgh to add an eviction moratorium to its emergency declaration. Advocates for the group spoke in front of city council on Feb. 16, and last week the group tweeted that Harrisburg has had their moratorium on the books for a month and have not been sued and that local constables — who dole out eviction notices — have been cooperating.

Cameron says she wants to see action now to address evictions. City Councilor Deb Gross (D-Lawrenceville) said during a council meeting on Tuesday that over 100 families are currently facing eviction proceedings in Pittsburgh.

“I am a renter myself, that is part of why I care,” says Cameron. “Any city official has to help the health and safety of the residents. Not doing so is hurting people.”