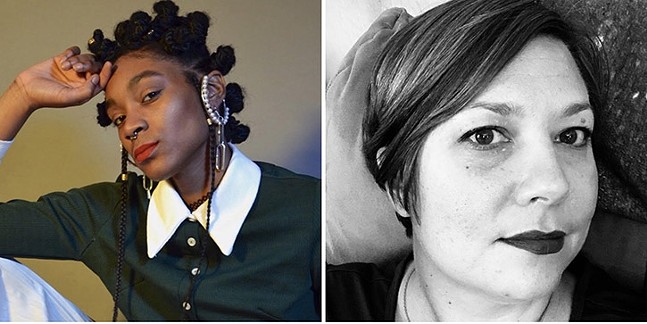 Photo: Courtesy of City Books
Alona Williams, left, and Marsha Timblin began their spring residency at City Books Feb. 1.
Despite the common wisdom that everyone has a book in them, writers need time, space, and support to bring those books and other projects out. City Books, an independent bookstore on Pittsburgh’s North Side, aims to give writers all three with its writers-in-residence program, something I had the honor of participating in as the fall 2020 resident. Now, two new writers have come onboard as the spring writers-in-residence: Alona Williams and Marsha Timblin.

Both residents are graduates of Chatham University. Williams graduated in 2020 with a BFA in creative writing with a minor in music, and they write about “the mundane, self-discovery, and freedom.” Their work has appeared or is forthcoming in 1839 Magazine, The Minor Bird, and the Pittsburgh Current, among others. Timblin holds an MFA from Chatham University, and her work has appeared in matchbook, Orange Blossom Review, and Amethyst Review, among others.

The residency began Feb. 1 and will continue through June 30. Williams is working on a hybrid genre book about growing up in Pittsburgh, gentrification, and Black Midwest culture and history. They’ve started with 12 poems and plan on including other forms of text and art, such as photos and historical media. One of the books they’ve been drawing from for research has been Mark Whitaker’s Smoketown: The Untold Story of the Other Great Black Renaissance.

“A couple of the words that I wrote down to describe this project is: Black, Midwest, industrial, historic, anthropological, futuristic,” Williams says. “My personal artistic goals is to craft poems that tell a story collectively and separately and by doing that, master my own voice in prose poetry.”

Timblin has a dual focus for her residency: seeking publication for a 16-piece short story collection she completed in 2020 and starting her next book. While editing and revising the completed collection was no small task, finding and submitting the collection to independent presses, publishers, university presses, and literary contests that would be good fits is daunting for Timblin.

“Having this residency as a parameter to put in the time and effort to do ‘the hard part’ is something I really look forward to,” Timblin says. “I know it will help me see this project, that I have already put so much of myself and my creative energy into, through to the next phase.”

Williams and Timblin will receive a $500 stipend from a One Northside Grant awarded to City Books by New Sun Rising. The residents will also have a 40% discount on books and merchandise during the residency, receive a City Books Reader’s Journal, and have the opportunity to curate a virtual Reader’s Choice bookshelf on Bookshop.org.

They will both have access to the writing space in the bookstore, which City Books owner Arlan Hess will clean between each visit. While neither has used the space yet, Timblin and Williams plan to come in on Wednesdays and Saturdays, the two days the store is open for pick-up orders. They also have the option to complete their residency obligations from home during COVID. While that may seem to undercut the residency’s goal of giving writers space to work, they still benefit from the residency’s validation and support, which has given them emotional space and encouragement to work on their projects.

“This is probably my first time ever that I felt like, I’m a writer and this is my job, and I’m doing something important,” Williams says. “This is not just me trying to get my stuff off, this is something that needs to come into the world … [I]t gives me a little bit more validation that people do want to see what I have to create.”

As the fall 2020 writer-in-residence, I completed the entirety of the residency from home. I watched the graph of COVID cases in Allegheny County each week to determine whether it was safe to go to the store, but each week seemed to bring increased cases or new risk factors — holidays, social media feeds flooded with people flaunting COVID safety precautions, local colleges and universities bringing students back to campuses.

It was difficult carving out a physical space to write, especially since I moved into my then-partner’s apartment early in the residency and had to navigate what felt like his space. I had also been laid off from my job twice due to COVID, which left me with a shattered sense of stability and self-confidence, as well as flare-ups in my physical health due to stress.

Despite not being able to access the physical support of the residency, communication with Hess and the two virtual writers-in-residence provided immense support and helped me prioritize and create “mental space” for writing. Like Williams, for the first time, I felt like I was a “real writer” who deserved time to write. I had to move my writing space based on where my then-partner was in the apartment, but during my residency, I wrote eight new essays as the beginning of an essay collection about adoption and identity, and I wrote a new short story and revised two stories I’d written before the residency.

Hess encouraged me along the way, cheering me on when I got two essays accepted for publication during my residency, and shared in my joy as I learned Chinese recipes as another means of exploring my Chinese identity. While she was always excited to hear about the essays or stories I was working on, she never pressed me or demanded that I keep to a productivity schedule. The leniency and flexibility of the residency, balanced with the mental support and validation, created an environment where I was able to be generative and build my confidence as a writer.

Now that my residency has ended, I’ve retained that confidence and am continuing to work on the essay collection with the hope of finishing the first draft by the end of April. While the residency did not allow for broader interactions with the Pittsburgh literary community due to COVID, I am glad to see the City Books writing community continue to grow, and I look forward to seeing what Williams and Timblin make of their time as residents.