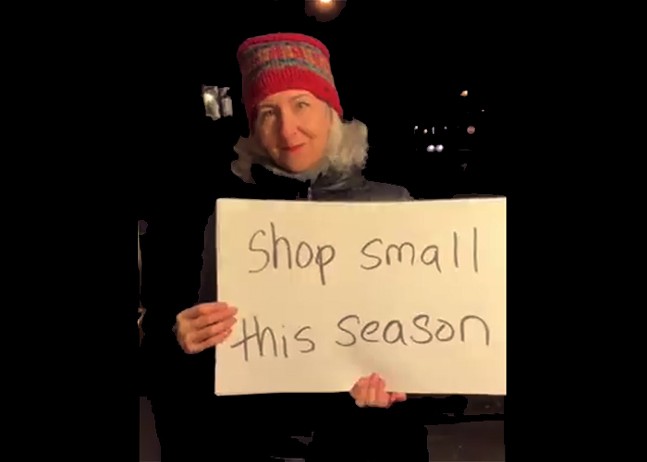 Screenshot
The owner of Pittsburgh-area bookstore, City Books, recently posted a video to Twitter urging holiday shoppers to avoid Amazon this year, instead opting to shop small and local. The video parodies the iconic Love Actually scene where Mark (played by Andrew Lincoln) finally expresses his feelings for Juliet (played by Kiera Knightley).

Released on Nov. 15, the City Books version stars shop owner Arlan Hess showing up to the door of scene partner and husband Patrick Schmidt, with cue cards reading "to me Jeff Bezos is evil" and "Avoid Amazon this year," citing Amazon's exploitation of workers, tax avoidance, and environmental impact.

Hess also included a cue card featuring the cover art for a number of books by Pittsburgh authors, including The Secret Lives of Church Ladies by Deesha Philyaw and Punch Me Up to the Gods by Brian Broome.

"I rely almost exclusively on social media for marketing the bookstore, so I wanted something eye-catching and recognizable that would run as close to a minute as possible so I could use it across our channels and that people could watch more than once," says Hess. "One of our TikTok followers wanted information about why shopping at Amazon was bad, and I was hoping to put together an 'Avoid Amazon' campaign anyway, so I decided I would combine the two. The card scene from Love Actually has become a recognizable meme — and it’s a Christmas movie — so I thought would be fun to re-create."

Amazon may be the fastest way to get your books from the comfort of your home, but it isn't always the best for publishers, authors, or booksellers. In a recent New York Times article, the founder of Bookshop.org, Andy Hunter, revealed that publishers usually make more money when their books are bought from independent bookstores instead of Amazon (Amazon declined to comment on the revenue share between itself and publishers).

Buying from sites like Bookshop.org or independent bookstores, or buying directly from the publisher's website are believed to be the most friendly way to purchase books in 2021, even if it tends to be a little more expensive.

City Books, known as Pittsburgh's oldest bookstore, is just one of many local bookstores that you can buy from this holiday season.

The City Books video has garnered quite a bit of attention on Twitter, with many echoing its message to shop small. It's an incredibly heartwarming video that's only about a minute long and ends with a kiss.

"It didn’t take long to convince my husband (Patrick Schmidt) to participate. He was very romantic about it; he wanted to make sure we got the kissing scene right, so we practiced that a few times," says Hess.